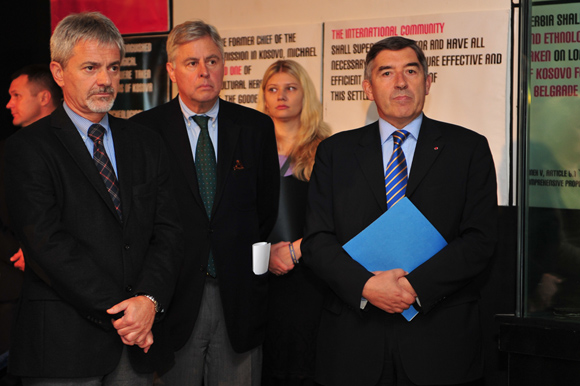 EU organisations in Kosovo hosted a reception at the National Museum in Pristina to mark the tenth anniversary of United Nations Security Council Resolution 1325 on Women, Peace and Security.

The aim of the event, which was jointly organized by EULEX, the EU Special Representative (EUSR) and the European Commission Liaison Office, was to enable the interaction between representatives of the Kosovo government, Kosovo womenâs groups, NGOs, and EU representatives.

Xavier Bout de Marnhac, the Head of EULEX strongly supported and highlighted the importance of the participation of women in peace-building as foreseen in UNSCR 1325, adding that EULEX tackles very seriously the violation of womenâs rights in all aspects of society.

âI wish to reiterate that domestic violence and sexual crimes are crimes that need to be prosecuted. I would like to recall that EULEX judges, as a part of their executive mandate, have already sentenced two men because of serious domestic violence. I strongly encourage the Kosovo judiciary to use these cases as an example for proper implementation of the rule of law when it comes to domestic violence, violence against women or any kind of gender-based discrimination. I personally consider that it is the primary responsibility of the Kosovo institutions to fully implement all laws, and especially to ensure that women become equal actors in all aspects of lifeâ, said de Marnhac.

The importance of the UNSC Resolution and the participation of women in peace-building was addressed also by EU Special Representative Pieter Feith, Renzo Daviddi, Head of the EC Liaison Office, Acting President of Kosovo Jakup Krasniqi, the acting UN Development Coordinator Doina Bologa, and Igballe Rogova from the Kosovo Womenâs Network.

UNSCR 1325 includes three pillars of action: prevention of violence against women in situations of armed conflict, participation of women in peace negotiations and peace-building, and protection from violence.