Kosovo and EULEX in joint effort to improve the asylum system 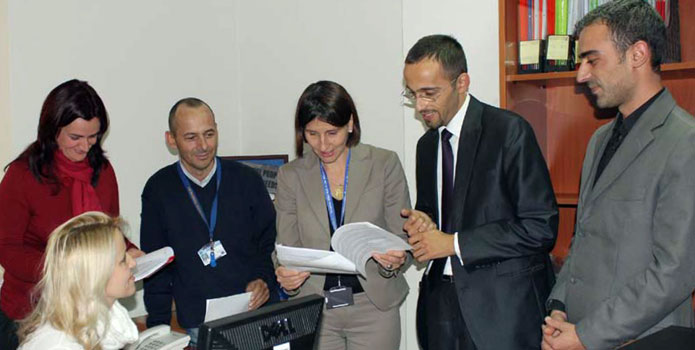 Protecting refugees who sought shelter in Kosovo from prosecution in their own countries represents the responsibility of the authorities dealing with asylum issues. However, in a place which was itself hit by a refugee crisis not so long ago, creating functional asylum system could be difficult, despite the traditional Albanian hospitality towards any guest visiting Kosovo.

Notwithstanding the asylum legislation in force, increasing number of asylum seekers, lack of functional system, shortage of resources and high number of unprocessed asylum claims, poses mounting problem for the government.


In 2008 and 2009 the total number of asylum seekers in Kosovo was very low, but until 2011 the number of asylum seekers went up to 400. The asylum centre could host only 25 persons, and with the increased number of asylum seekers, Kosovo had to accommodate them in a hotel with poor conditions at public expense. This state of affairs required a massive effort to make the necessary reforms. EULEX and other partners in refugee protection stepped in and offered assistance and advice to The Department of Citizenship, Asylum and Migration, which was dealing with the situation.


Since April 2010, Stela Haxhi, EULEX expert in migration management, through a dynamic Mentoring Monitoring and Advising (MMA) role, has assisted local authorities to establish fair and effective asylum procedures based both on the international human rights and refugee legislation standards granting protection to individuals and groups fleeing persecution. These are essential elements Kosovo should adhere to, in conformity with the 1951 Convention on Refugees.


"Mentoring Monitoring and Advising (MMA) is a great mechanism to achieve results. You have to have a proactive approach, be result oriented, build trust, be a patient negotiator, and above all be professional in what you do", says Stela Haxhi.


Stela Haxhi has developed a strategy that meets the needs of the reality in Kosovo, focusing on efficiency, effectiveness and impact. This strategy includes an assessment of needs, interventions and follow-up. Identifying the needs, requirements, and difficulties, and providing recommendations only after jointly identifying the needs, has resulted in the full establishment and implementation of an asylum procedure which enables Kosovo to abide to its international obligations.


Her professionalism and her belief that it is possible to build and reform the structures, combined with her result oriented approach, have improved the efficiency of the Department on Citizenship, Asylum, and Migration.


A number of recommendations proposed by EULEX during the drafting process of legislation and practices have been put forward to the Kosovo authorities. Furthermore, different templates and various mechanisms which are now being used by the Department of Citizenship, Asylum and Migration have been crucial to the implementation of the legislation on asylum.


"Around 96% of the EULEX recommendations to improve the work of the Department were taken on board," points out Stela Haxhi.


Monitoring can only be successful if the outcomes are measured and implemented becoming the legacy of the institution.


"It is very important to build institutional memory, with an awareness of the environment that one is working in. You can be part of Kosovo's progress only by working closely and honestly with local counterparts, through mutual accountability and respect", said Stela Haxhi.


Some of the work is already paying off. Department on Citizenship, Asylum and Migration has improved the efficiency of processing cases, including refugee status determination procedure. These measures are very important for Kosovo. Having in place the legal framework that supports the international refugee protection system, as well as efficient asylum implementation represents a crucial part of the visa road map implementation.


"Working with asylum seekers is not always easy. It requires empathy and mental strength, combined with a thorough knowledge and understanding of the specific conditions and needs of this particularly disadvantaged group. The establishment of a fair and efficient asylum system, in line with international standards and human rights, is a core success of the partnership and joint achievement of Kosovo authorities and EULEX. We hope that this achievement was built to last", concludes Stela Haxhi.


EULEX remains committed to support the Kosovo authorities in their efforts to implement the asylum procedures and ensure a fair asylum system for those in need of international protection.