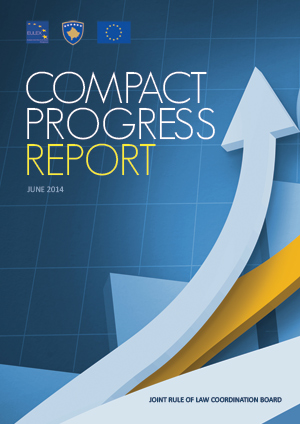 This Compact Progress Report (CPR) marks an important step in the development of the Kosovo's rule of law since the signing of the Joint Compact in November 2012. The report takes stock of the recent developments, including the remaining challenges in this area.

With the recent decision by Kosovo to extend the EULEX mandate for another two years, Kosovo has underlined its continued support for the Mission, as well as its commitment to strengthen the rule of law in Kosovo. While important steps are being taken in transitioning EULEX's mandate, for instance all rule of law institutions will be headed by Kosovo officials, nothing has changed in the joint Compact commitment: the setup of sustainable, accountable, independent and multi-ethnic rule of law institutions, free from political interference and

adhering to international recognised standards and European best practices. These are the goals that Kosovo, the EUSR/EU Office and EULEX

Kosovo will strive to achieve
jointly in the coming years.

During the last period a number of important objectives have been reached. Kosovo institutions are strengthened and more capable in addressing rule of law challenges. In particular, progress in the implementation of various agreements in the framework of the EU-facilitated dialogue has helped fostering institutions. To name a few: a new Kosovo Police Regional Command North has been created, reinforced by former MUP officers integrated into the Kosovo system. Revenue collection has started at the two Crossing Points in northern Kosovo and the parties have agreed on the location of permanent crossing points. A total of 12,391 certified copies of Civil Registry Books have been handed over to Kosovo authorities, which will contribute to the establishment of a reliable civil status system in Kosovo.


However, the reporting period was marked by a partial slowdown in implementation of the Compact agreement, particularly relating to agreed roadmaps to improve the capacities of local institutions. The roadmaps are lagging behind the agreed timeframes, mainly due to a lack of human and financial resources. Joint Rule of Law Coordination Board, JRCB, has taken note of the Kosovo's Government renewed commitment to adequately resource relevant institutions. In order to pave the way for the EULEX to disengage from certain areas, noticeable progress needs to be achieved.

In order to make a second KPA Appeals Panel and Special Chamber of the Supreme Court (SCSC) on privatisation matters fully operational, both institutions need additional staff. Hiring of additional local judges and support staff is essential in order to enhance the performance of the SCSC. The KJC announced that the missing judges will be appointed by the end of June 2014.

Furthermore, the Mitrovica Detention Centre Prisoner Escort Unit remains understaffed and underequipped. But with the allocation of adequate resources, specific training of prisoner escorts in north of Kosovo and the signature of a Memorandum of Understanding with Kosovo Police on support for prison escorts in the north will help to overcome the challenges soon. The Kosovo Correctional Service has expressed its readiness to take over the escort tasks in the north.

While witness intimidation continues to be a challenge for Kosovo, progress in the area of witness protection is noticeable and the Kosovo Directorate of Witness Protection is on its way towards full operational sustainability. EULEX and Kosovo have started to work on the establishment of a local war crimes section in SPRK and in the Kosovo Police. Plans for the enhanced performance of the Department for Forensic Medicine have been formulated and agreed upon. All measures hinge on the turning of the Department into an independent Agency, a decision which requires legal changes.

Joint Rule of Law Coordination Board, JRCB, has also endorsed a matrix of anti-corruption benchmarksto track progress in the implementation of existing anti-corruption policies. It established a joint working group to feed the matrix with concrete data on regular basis.

The JRCB also started to discuss how to address perceived challenges of political interference in the rule of law. This includes tacking inappropriate statements regarding ongoing judicial proceedings, thus putting into question the independence of the judiciary, as well as legislative deficiencies, insufficient ring-fencing of rule of law institutions against potential interference and lack of human and other resources. The JRCB intends to soon agree on a set of measures to address this issue.

Initiatives such as these, paired with Roadmaps and other rule of law priorities, such as the StructuredDialogue on Rule of Law, the Visa Liberalisation and Progress Report assessments, will form the backbone of JRCB's work in the coming two years.

The EUSR/EU Office and EULEX will continue to support Kosovo's Rule of Law institutions, including in relation to the Structured Rule of Law Dialogue, the Visa Liberalisation Roadmap, and the Feasibility Study.
These crucial processes firmly anchor Kosovo in the EU's policy framework for the Western Balkans. In particular, EULEX will build on the solid expertise in its renewed mandate from 15 June 2014, and the important work carried out until now by its staff.