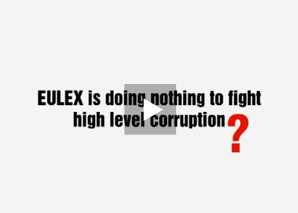 âEULEX is doing nothing in the fight against high level corruptionâ is the slogan of a new campaign that has just been launched on TV stations in Kosovo. The campaign spot is being broadcast on all major TV stations, more than 35,000 flyers with the same message are being distributed around Kosovo and T-shirts and car air fresheners in support of Kosovoâs Anti-Corruption Agency are also being distributed.

The campaign is the initiative of the EULEX Press and Public Information Office (PPIO).

âThere are two main aims of the campaign,â said Nicholas Hawton, Head of PPIO, âFirstly, we want to challenge the view that nothing is being done in the fight against corruption. Whilst corruption will never be entirely eliminated and much still needs to be done, progress is being made. For instance, there have been thirty-three verdicts in major, high-level corruption cases; there are sixty ongoing investigations. Those found guilty include judges, police officers, government officials and politicians. These are not insignificant facts,â said Hawton.

âSecondly, we want to stress the fact that EULEX can only do so much. The fight against corruption involves us all. EULEX deals with high-level, complicated and time consuming cases. But the vast majority of work in the fight against corruption is carried out by the local authorities. EULEX can only tackle a fraction of the problem. But we are doing it together and in support of the local authorities. That is why we are supporting the local Anti-corruption agency and advertising their hotline number,â said Hawton.