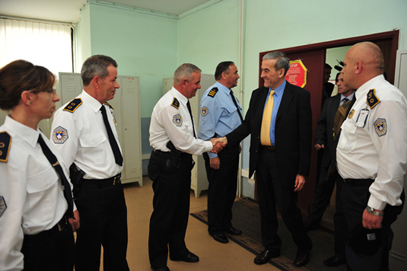 Yves de Kermabon praised the work of the police whilst on a trip to Vushtrri/Vucitrn police station. He met the local Kosovo Police management team, comprising both Albanian and Serb officers, as well as EULEX officers.
The stationâs chief, Abdylaziz Hoxha, told the EULEX Head of Mission that good policing was improving freedom of movement and security. but a major judicial problem was the lack of judges and prosecutors at the Mitrovica District Court which was affecting the policeâs ability to resolve more than 1,000 cases. Mr de Kermabon also visited the Priluzje sub-station.