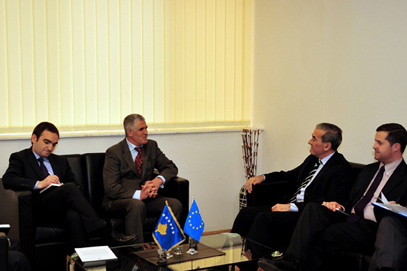 Yves de Kermabon congratulated the newly appointed Minister of Internal Affairs, Bajram Rexhepi, and Minister of Justice, Haki Demolli in two separate meetings in Pristina today. Mr. Rexhepi and Mr. de Kermabon discussed the challenges that Kosovo is facing in the area of asylum seekers and falsified documents. Mr. Rexhepi expressed his willingness from the Ministryâs side to work hard to battle those issues as a way to move things forward on Kosovoâs European integration path. Mr. de Kermabon promised that EULEX would support the Ministry in this respect.

Mr. Demolli expressed his appreciation for the work done by EULEX through monitoring, mentoring and advising and promised that the Ministry stands ready to continue cooperating with EULEX. Mr. Demolli and Mr. de Kermabon also discussed the challenges that the judiciary is facing in north of Kosovo and both agreed that there is an urgency to bring back judges and prosecutors to the District Court in Mitrovica.

Mr. de Kermabon informed the ministers of the next Rule of Law Coordination Board meeting to be held on 21 April which will be dedicated to explaining the structure and aim of this board for the newly appointed ministers.