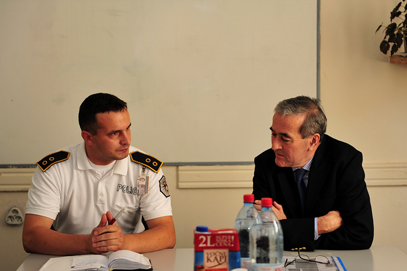 During a visit to the police station in Leposavic/Leposaviq, the Head of Mission Yves de Kermabon, said outreach activities like this are a crucial way of finding out what is going on in different parts of Kosovo and help in the process of decision-making.

The Head of Mission met the station commander, Lieutenant Dragan Stefanovic, who stressed the fact that their area of responsibility was one of the biggest in Kosovo.

The region includes 72 villages and the towns of Leposavic/Leposaviq, Lesak/Leshak and Socanica/ SoÃ§anicÃ«, with a combined population of more than 20 000 inhabitants. This is a majority Kosovo Serb populated area but also with Kosovo Albanian and Bosnian communities. ââIn the recent past we have not had any inter-ethnic conflictââ said Lieutenant Stefanovic.

Most of the cases that the police are dealing with are related to traffic accidents, thefts, disturbing the public peace and order, and the illegal possession of weapons.

ââOne of the biggest problems is the functioning, or non-functioning, of the court. Only a few prosecutions have been brought up until now and they were brought by a EULEX Prosecutor. There are delays with all cases, and many of them have expired. Even when we have a verdict from the court, the punishments are not adequate and that sends a bad signal to citizens, ââ said the commander.

Yves de Kermabon stressed that there was an urgent need to improve the rule of law situation in the Northern Kosovo. ââDiscussions on the return of local judges and prosecutors to Mitrovica District Court are ongoing. EULEX is working intensively to prepare the necessary infrastructure so that this process moves forward in the coming weeks. We hope the solution to the problem cand be found in this period.ââ