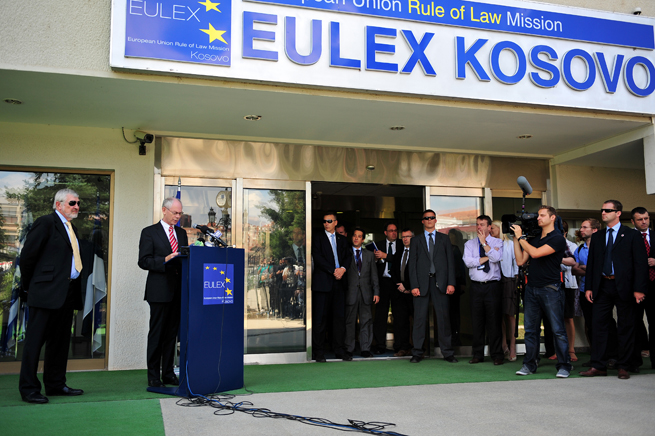 During his visit in Kosovo, the President of the European Council Herman Van Rompuy metPresident of Kosovo Fatmir Sejdiu, Speaker of Kosovo Parliament Jakup Krasniqi and Prime Minister Hashim ThaÃ§i. He also met EU Special Representative, Pieter Feith and visited the Headquarters of the European Union Rule of Law mission, EULEX, where he was received by Deputy Head of Mission, Roy Reeve. After his visit to EULEX, the President made the following remarks:

"Let me take this opportunity to express my appreciation and support for the work of EULEX and also the work of other EU presences here in Kosovo.

The EULEX mission is the largest EU civilian mission ever launched. Its work, together with the activities of the EU Special Representative, and the work on the reform agenda by the European Commission Liaison Office, is crucial for the development of Kosovo and its European aspirations.

Rule of law is one of the defining values of the European Union, and one of our most important priorities in Kosovo. The EULEX mission has achieved good results. Its activities reflect the EUâs strong commitment to the fight against organised crime and corruption.

The EUâs 27 Member States lend their full support to the work of EULEX. As President of the European Council, the body that gathers the leaders of the Member States, I take pride in your achievements. You are doing valuable and very important work, sometimes under very difficult circumstances.

You enjoy my whole hearted support."