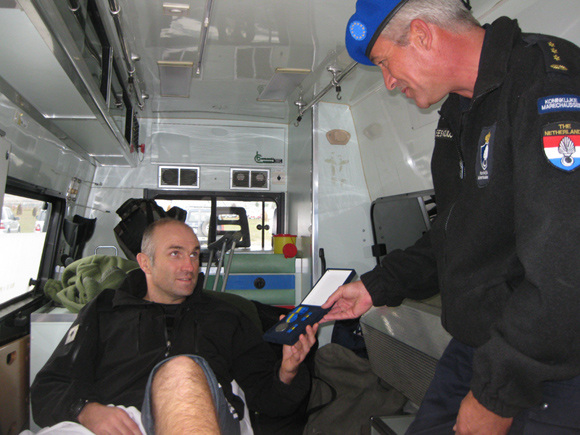 The French Gendarmerie Adjudant-Chef Ronan Coat, who was wounded in clashes in Mitrovica on the night between 11 and 12 September, was on 20 September awarded with the Common Security Defence Policy Mission in Kosovo Service Medal.

On behalf of HoM and HoPC, the Head of SPD issued the medal at the airport while Ronan Coat was waiting in an ambulance for his repatriation flight to France. Ronan Coat was injured when shots were fired in the direction of the EULEX Formed Police Units during the clashes, an incident which was strongly condemned by the head of EULEX Kosovo, Yves de Kermabon.

After medical treatment in Kosovo his continued recovery will now take place in France, close to his family. Upon departure Coat expressed his gratefulness for all the sympathies he received from various people during his stay in hospital and added that this has been a great support from him during his recovery.