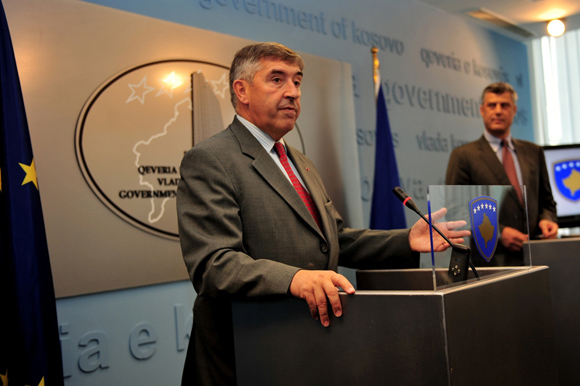 Xavier Bout de Marnhac has taken over as the new head of EULEX Kosovo. On his first day in office he held introductory meetings with his principal interlocutors both in the Government of Kosovo and the international community.


He met leading political figures, including the Acting President of Kosovo Jakup Krasniqi and the Prime Minister, Hashim Thaci.

The second set of meetings were with the EUSR chief Pieter Feith and the head of UNMIK Lamberto Zannier.

De Marnhac paid tribute to his predecessor Yves de Kermabon, who served as Head of Mission from February 2008. He said: âWe are moving to the next phase of the work of EULEX. Under its first mandate and under the excellent leadership of Yves de Kermabon, the mission has firmly established itself and is fully exercising its core mandate.â

He also set forth his priorities as the new Head of EULEX: âMy principal concerns will be to re-establish the rule of law in northern Kosovo and to continue the fight against corruption and organised crime. I also look forward to further encourage and support the local rule of law institutions in moving towards European standards under the principle of local ownership.â

Mr. de Marnhacâs appointment is for one year renewable.