Give and Let live 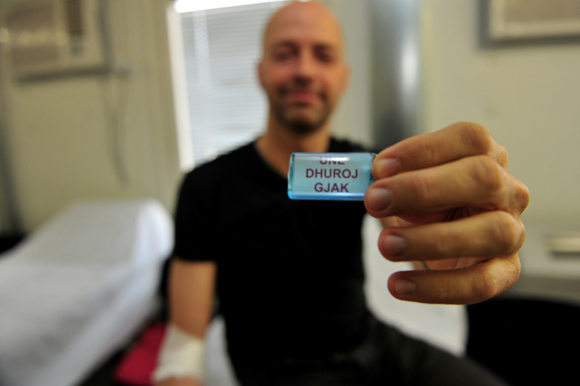 In response to the short supply of blood at the Blood Transfusion Centre of Kosovo, Shpresa Haxhibeqiri, a doctor from EULEX Medical Unit, has organised a voluntary blood donation drive. More than 50 staff members working for the EU institutions responded to the call. It is the first time EULEX has organised such an event.

The two-day blood donation event has been held at the Medical Unit in Pristina (Camp Alpha Bravo). Although it is the first of its kind, Shpresa hopes that it will not be the last.
âI hope this will create wider awareness of the importance of voluntary non-remunerated blood donation and encourage more people to donate blood regularly. I would also like to thank those individuals who voluntary donate their blood without any reward except feeling personal satisfaction about helping to save someone's lifeâ, said Shpresa.

The turnout of blood donors was very high. EULEX medical staff together with the medical staff from the Blood Transfusion Centre made sure the process went as smoothly and as safely as possible.

Richard Winkelhofer, a EULEX Judge, made a short stop to the Medical Unit, on his trip back home to Austria. He donated blood before catching his airplane to Vienna. Richard is a regular blood donor.

âI know that I have a rather rare blood group AB positive and, luckily, I am healthy. I donate blood one or two times a year, and it is a good feeling knowing that my blood could save somebodyâs lifeâ, said Richard.

Ymer Meka who is the head of the Blood Transfusion Centre said that blood donors do not receive any material benefit, but rather âa personal satisfaction knowing that someone will continue living due to their generosityâ.

The leader of the Blood Donor Kosovo Society Mazllum Belegu said that â the international community in Kosova is not only helping Kosovo with their uniforms and guns and their readiness to act as a fighters but also they have proved that they are ready to donate their blood and help lives in Kosovo for those in need for bloodâ.

The EULEX Medical Unit is planning to organise blood donations twice a year, in close cooperation with the Blood Transfusion Centre. The unit thanks all of those who have donated their blood and for those who are still in doubt, it strongly encourages them to take part.