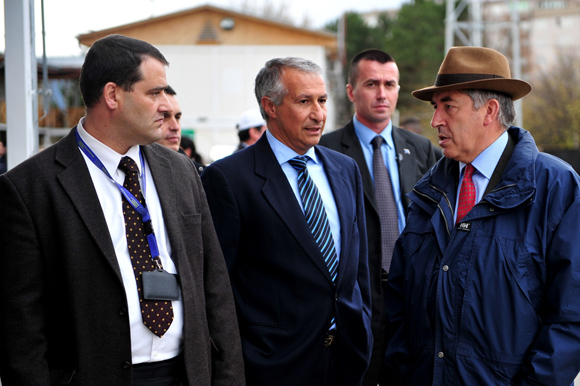 With the aim of seeing how the mission is functioning on the ground, the Head of EULEX, Xavier de Marnhac, visited the region of Gjilan/Gnjilane. De Marnhac met with EULEX staff, including the administrative support, EULEX members of the three components and their local counterparts.

At the EULEX premises in Gjilan/Gnjilane, Michele Sabatini, the Regional Administrative Coordinator for the region, briefed de Marnhac about the current work and the challenges.

âIt is much easier for me to understand the mission if I take the time and talk to the mission members and listen to what they have to sayâ, said de Marnhac at the meeting with the EULEX staff members, where he presented his vision and the three priorities for the mission: re-establishing the rule of law in the north, fighting organised crime and corruption, and enforcement of monitoring, mentoring and advising (MMA).

In Gjilan/Gnjilane de Marnhac met Elmina Mahmuti, the Regional Director of Kosovo Police (KP), where they discussed cooperation between EULEX and KP and the challenges ahead.

âWe have had great cooperation with EULEX. We work very closely togetherâ, said Mahmuti, adding that ârelations between the different communities are very good and without any significant inter-ethnic incidentsâ

De Marnhac concluded his visit at the Gjilan/Gnjilane District Court where he met EULEX judges and prosecutors and their local counterparts.