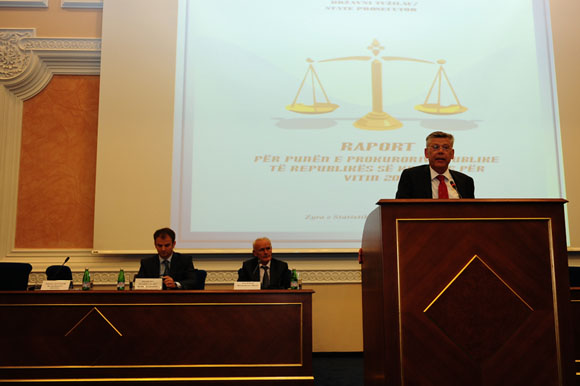 The EULEX Chief Prosecutor Johannes van Vreeswijk was a guest at the presentation of the report on the work of the public prosecutor offices of Kosovo.

EULEX Chief Prosecutor Johannes van Vreeswijk speaking during the presentation of the report.

âI will not only look at 2010, but at 2008 to 2011, as one year should not be looked upon in isolation. Context and long term developments are relevant.

âIn general, the public prosecution service in Kosovo has made substantial progress since 2008. New important laws are in place which set the required quality of legal framework and provide appropriate salaries. Those prosecutors who were corrupt are not in service anymore after the re-vetting process. There is also a new generation of young prosecutors, trained by Kosovo Judicial Institute (KJI), willing to serve Kosovo society.

âIt is time to feel refreshed by the winds blowing through the Kosovo prosecution offices.â