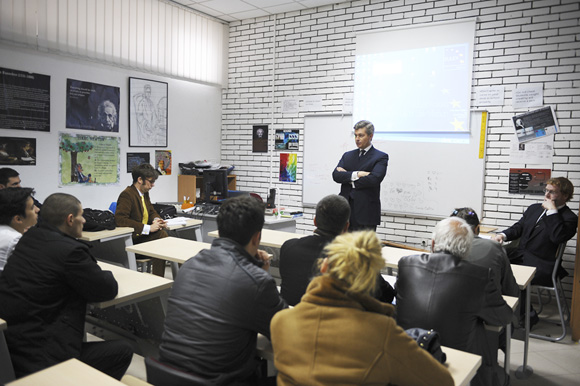 On Wednesday 7 March Malcolm Simmons, who works as a EULEX Judge in the Peja region, visited the American School of Kosova in Pristina. The EULEX TV advert âJustice in One Minuteâ was shown to students. It addressed the importance of ârule of lawâ in any modern, democratic society. Simmons gave an overview of the achievements and challenges that he has encountered during his time in Kosovo. âThere is still a lot to be done in the judiciary. One example is the issue of domestic violence and violence against women. These crimes are often not taken seriously by institutions. But issues like this have an enormous impact on whether people feel secure and whether they feel they can trust rule of law institutions to deal with such problemsâ, said Simmons. The students of the American School of Kosova initiated a constructive debate where Judge Simmons provided actual case examples, explaining how the justice system works in sensitive areas such as organised crime.

On Monday 5 March EULEXâs Anti-corruption Expert, George Mills, gave a lecture in front of thirty-five students at the technical high school in Gracanica. Corruption, along with unemployment and poverty, is seen as one of the most difficult problems facing Kosovo. Mills defined the problem of corruption as a âbetrayal of trustâ by those who are given responsibility in society. Mills explained how EULEX helped in combating corruption in Kosovo, for example by promoting the confiscation of criminal assets. âConfiscation of criminal assets is becoming a more and more important weapon in the fight against corruption and organised crime, as it deprives individuals of the fruits of their criminal activitiesâ, said Mills.