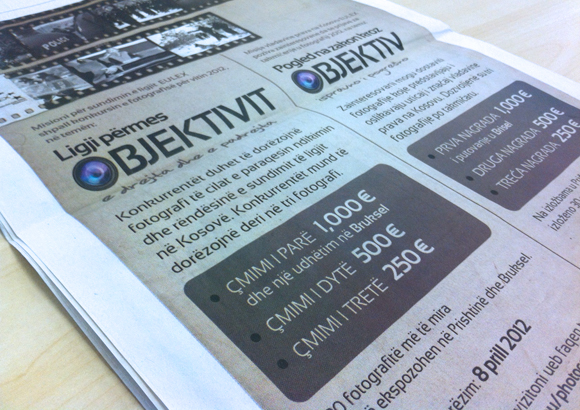 EULEX Press and Public Information Office has launched a photo competition, organised under the subject: âLens on the Law - the right and the wrongâ. The photographs will present and capture the impact and importance of the rule of law in Kosovo.

âThis is the first time that EULEX has launched an external photography contest. Itâs very important for us to see how people outside the mission portray the rule of lawâ, says Enisa Kasemi, EULEX photographer and organiser of the contest. âAs they say, a picture is worth a thousand words, and I am sure we will have some very interesting interpretations of the rule of law, without using wordsâ, she adds

The top thirty photographs will be displayed in exhibitions in Pristina and Brussels. The photo exhibition in Pristina will be held on 2 May 2012 in the National Library of Kosovo. The contest is being advertised in several newspapers.

To learn more about the contest, follow this link: www.eulex-kosovo.eu/photocontest