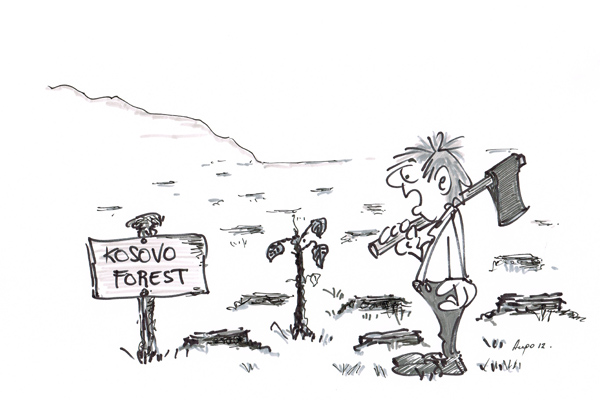 Organised crime, gun-toting gangs and money to be made: A report on a seemingly petty criminal offense with a potentially big impact.


In June 2012, in a valley near Leposovic in northern Kosovo, Kosovo Police, EULEX and forestry officials were assessing the scale of illegal wood-cutting in the area. Their convoy discovered evidence of logging such as abandoned tractors with chainsaws and loaded trucks of wood. As the convoy drove down a bumpy track, they came under gunfire. EULEX police officers, who were there in a monitoring and advisory role, said the shooting lasted for several minutes. Bullets ricocheted off the ground nearby. KP returned warning fire with their AK 47s. As the convoy manoeuvred its way out of the danger zone, the shooting gradually ceased. Thankfully, no one had been injured.

The incident was a dramatic example of just how important and dangerous the issue of illegal wood-cutting can be. And it is not the only example. In March 2011, a thirteen year old boy was shot dead while illegally cutting wood with his father on someone elseâs property. Some forest fires, which can pose a real threat to villages and peopleâs lives, are believed to have been started by illegal wood cutters trying to cover their tracks. The activity has also increased tensions between different communities. Suffice it to say, it is a real problem.

âProperty disputes should come with a government warning â they can kill and should not be taken lightlyâ says EULEXâs Property Rights Co-ordinator, Declan OâMahony. âThere are criminal elements acting with impunity, stealing from Kosovoâs public and private forests, which are weakly protected. The forests of Kosovo provide a stage on which corruption, organised crime, killings, smuggling and environmental devastation can be enacted. Itâs a significant problem and needs to be dealt withâ says OâMahony.

According to the Kosovo Forest Agency 42% of Kosovo is covered by forest. Some 32 % of this area is owned by small landowners; 68% is publicly owned. According to an inventory carried out by the Norwegian Forestry Group (NFG), uncontrolled logging occurs in 35% of forest areas. In terms of the volume of wood lost through illegal practices, the NFG estimate that 100,000m3 is lost per year.

The lack of capacity to protect forests in Kosovo means that publicly and privately owned forests particularly at the border/boundary are vulnerable and a prime target of wood thieves. Robby Zocher, an Investigator in EULEXâs Task Force Mitrovica (TFM) said âIf you happen to be a well organised criminal individual, with resources to hand, money is figuratively growing in trees and there for the pickingâ. The TFM, in an executive capacity, is investigating the case described in the opening scene of this article.

The issue of stealing wood is nothing new and has a long history. This chequered history is marked by varying levels of control and management depending on the regime governing the forests at any one time. In 1999, the institutional changes in Kosovo led to forests becoming more vulnerable and provided more opportunity for criminals to act with impunity.

OâMahony says âCentral to the European ideal is the obligation of the authorities to protect property and that of its people. Any weakness of the authorities in this area increases the risk that people feel forced to take the law into their own hands with, possibly, fatal results.â 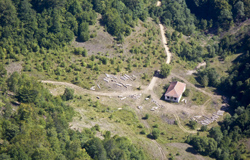