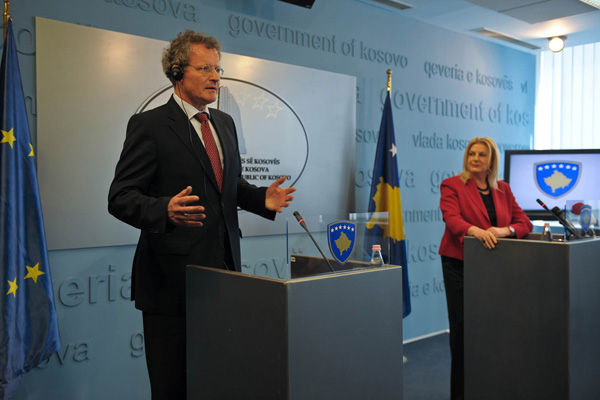 EULEX Kosovoâs new Head of Mission, Bernd Borchardt, has promised to continue the close working relationship with the Kosovo authorities, on his first day as head of the EUâs largest civilian mission.

âThere are many challenges ahead for EULEX and for Kosovo. We are in partnership together and, with partnership, comes responsibilities on all sides. EULEX will continue to support Kosovo in enhancing the rule of law and in furthering its EU perspective,â said Mt Borchardt.

He was also welcomed to his new post by the EU Special Representative to Kosovo, Samuel Zbogar.

âI am sure we will work hand in hand, because we have a common goal here: to help Kosovo become a member of the European family,â said Mr Zbogar.

In his meetings with Government officials and in statements with the media, the new Head of Mission made mention of the European-wide police operation against smuggling of migrants human trafficking which took place earlier in this week. Dozens of people were arrested. âThis operation was greatly helped by work carried out by EULEX and by Kosovo Police. This shows how effective we can be, working together,â said Mr Borchardt.