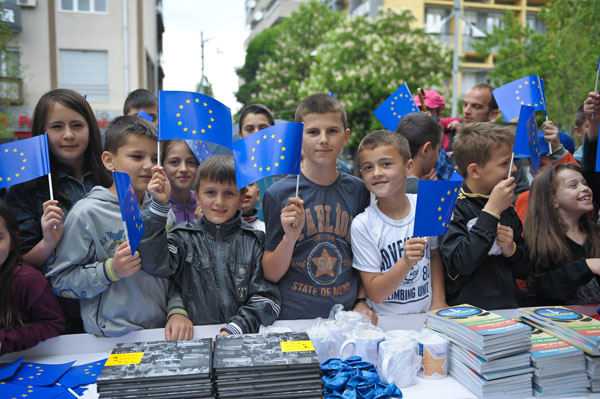 On 9 May, the EU Office in Kosovo organised an EU fair in Pristina, to mark Europe Day.

The Head of EULEX, Bernd Borchardt and EULEX staff members were also present and explained the role of EULEX and the Mission mandate whilst handing out promotional material.

EU Day celebrates 9 May 1950, when the first step was made towards the creation of what is now known as the European Union. It is an occasion to organise activities and festivities that bring Europe closer to its citizens and the peoples of the Union closer to one another.

EULEX's stand was one of the main attractions, where very enthusiastic children and adults were determined to get hold of the Mission's T-shirts, baseball caps, pencils, notebooks, and other promotional material about the work of the mission.

During a brief address to media the EULEX Head of Mission Bernd Borchardt said, "When I left Kosovo in 1999, I knew that people here wanted Kosovo to move toward the European Union. You have made big steps in this direction, and EULEX the mission that I am heading will continue to support Kosovo in enhancing the rule of law and in furthering its EU perspective."

EULEX was also present in Brussels. A team from the Press and Public Information attended the Open Day events in the Council building, joining colleagues of other EU Missions from around the world. Thousands of visitors attended the event.