Borchardt: Kosovo to set the standard for the region 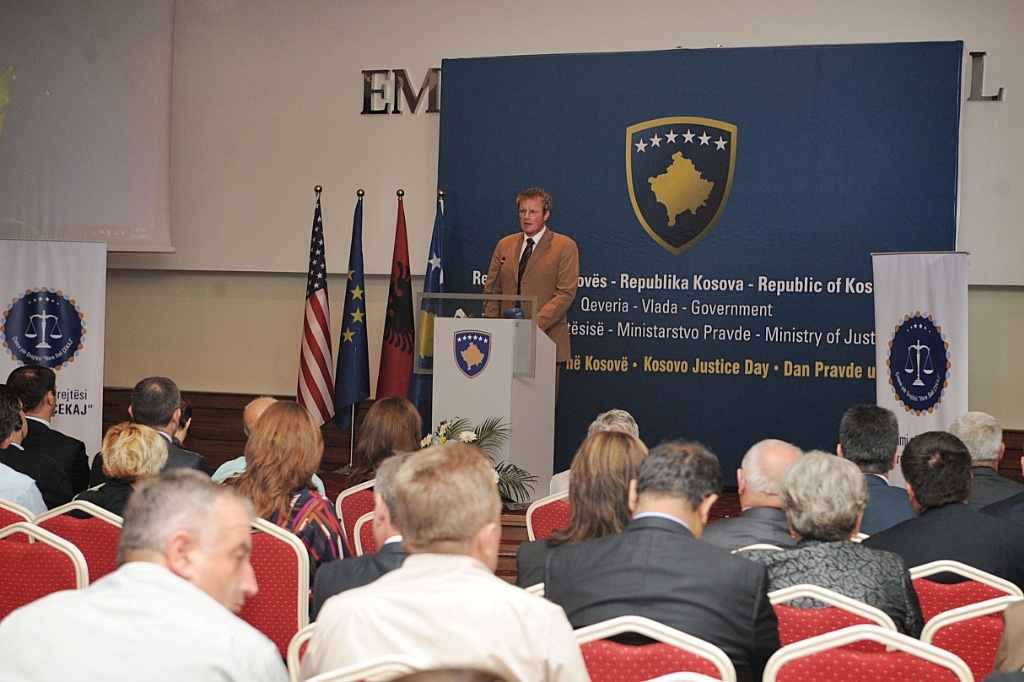 On marking of the anniversary of "Kosovo Justice Day", organised by the Ministry of Justice, Head of EULEX Bernd Borchardt, in an address to participants said that EULEX is a unique instrument created by the European Union with one aim - to take Kosovo forward on its path towards rule of law. Among other, Borchardt highlighted that he as an aspiration and an ambition: for Kosovo to set the standard for the region in the field of rule of law.

I'm very pleased to be today here with you, on this important anniversary, an event organised by Deputy Prime Minister and Minister of Justice, Hajredin KuÃ§i, with whom I have excellent cooperation.

Justice and rule of law in Kosovo:

As the EU Commissioner for Enlargement Stefan Fule said last week in the address to Kosovo Members of Parliament "EULEX is a support for the benefit of Kosovo; a support other countries in the region cannot benefit from".

EULEX, the mission which I head, is a unique instrument created by the European Union with one aim - to take Kosovo forward on its path towards rule of law. To help Kosovo achieve European standards for our mutual interest â Kosovo's interest and the European Union's interest. EULEX works as an integral part of the Kosovo institutions and applies Kosovo law.

In the background of the on-going debate, last week in an interview I was asked: "When does EULEX go home"? My reply was that "we want to take Kosovo home, home for Kosovo is Europe, and Europe means rule of law".

European Union is not a simple association of organisations which is based on agriculture subsidies and standards for industry. It is first and primarily an organisation of democratic nations based on rule of law.

But in order for the mission to efficiently implement its mandate we need your support.

I believe Kosovo should have robust and independent rule of law institutions that operate free from political and criminal interference. I believe that Kosovo institutions should be able to dispense justice to all citizens, irrespective of their ethnic or social background, or how rich or poor they are. That's our common goal.

Together with the consolidation of rule of law institutions, I can see a growing demand for the ownership, and this is very important to me. This is a commendable sign of maturity and a sign of progress. Therefore, we react to that.

Increasingly we are working more and more in mixed teams: it is the norm now to have a mixed police investigation team, to have a mixed prosecution team and to have a mixed panel of judges. Our Mobile Team of prosecutors are not taking on any new cases. Since November more municipal level cases are being adjudicated by exclusively Kosovo judges than mixed teams. Just last week I signed a Technical Agreement with Minister Rexhepi on intelligence sharing which will enable KP to better fight crime and corruption, in particular. This was not only a practical agreement, but also a sign from our side â a sign of confidence.

But the demand for ownership also is not enough. This needs to be followed by capacities and willingness of judges and prosecutors to prosecute and to judge. It needs to be translated in progress not only in good laws, but also in good bylaws and good application of the laws, and results which mean for cases to be investigated, prosecuted and adjudicated. Only this way the confidence of the public in rule of law institutions will grow. This is the EULEX mandate in the nutshell â and instrument to assist Kosovo institutions in their progress towards sustainability and accountability.

Yes, EULEX has a mandate, but I also have aspirations and ambitions for Kosovo. I want Kosovo to set the standard for the region in the field of rule of law. No democracy can truly be sovereign without reaching these standards.

Thank you for your attention