This year, the 16 Days of Activism against Gender-Based Violence campaign under the theme âOrange the World: Generation Equality Stands against Rape!â focused on the victims of gender-based and sexual violence.

As part of a series of activities to mark the 16 days of activism, EULEX, together with the Institute of Forensic Medicine, continued the online and offline âSpeak up on Timeâ campaign on the importance of biological evidence preservation in sexual violence cases.

To raise public awareness and mobilize a greater audience, the Mission produced a series of videos featuring representatives of Kosovo rule of law institutions and responders that deal with gender-based and sexual violence cases.

Kosovo Police, as the first responder in such cases, affirmed its commitment to the victims of sexual violence with particular focus on the cases involving victims who are minors. Kosovo Police Sergeant, Fidane Ballazhi, explained:


Stressing the importance of biological evidence preservation, Judge Valon Kurtaj at the Basic Court of Pristina, noted that biological evidence plays a decisive role in most sexual violence cases, both in establishing the existence of the offence and in identifying the perpetrator:


When sexual violence victims do not have sufficient financial means to ensure equal access to justice, the go-to institution is the Free Legal Aid Agency, established by the Kosovo Assembly. The Deputy Executive Director of the Agency, Anita Kalanderi, pointed out that providing equal access to justice for all citizens, in particular marginalized groups, is the Agencyâs mission:


Victims of gender-based and sexual violence often resort to shelters to find a safe haven. The Centre for the Protection of Women and Children âMy Homeâ provides 24-hour services to sexual violence victims. The Coordinator of the centre, Lumnije Hajdari, spoke about the work of the centre:


Sexual trauma is also associated with short-term and long-term psychological consequences, including on the victimsâ mental health. Tarja Formisto, Deputy Director of the Institute of Forensic Medicine, delivered an important message on this topic:


Last but not least, EULEX supports Kosovo justice institutions in ensuring access to justice for victims of gender-based violence and ending impunity for perpetrators by providing expertise through monitoring investigative actions conducted by the Kosovo Police, by monitoring and analysing the handling of gender-based violence cases in the prosecutorial and court system, and by assessing the overall response of service providers and mechanisms. Chiara Tagliani, EULEX Thematic Lead Monitor of Gender-Based Violence cases, reiterated the Missionâs commitment to fighting this phenomenon:


During the 16 days of activism, EULEX also supported a number of activities implemented by the NGO âWomenâs Rightsâ, based in Mitrovica North, aimed at raising awareness of gender-based violence and ways to combat it. The activities included a street action to raise awareness of gender-based violence and the importance of biological evidence preservation in sexual violence cases, a public debate on âGender stereotypes and violence against womenâ, the screening of the film âPolytechniqueâ, which was followed by a debate on gender discrimination and sexual harassment, as well as an artistic performance on the topic âWomenâs and LGBTQ rights as Human Rightsâ, followed by a public debate on human rights.

Throughout the 16 days of activism, we lit the EULEX building in orange â the colour of hope for a world free of all forms of gender-based violence. This was a symbolic way to send out a strong message against gender-based and sexual violence. 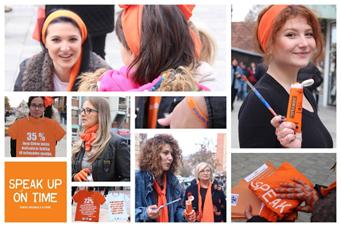