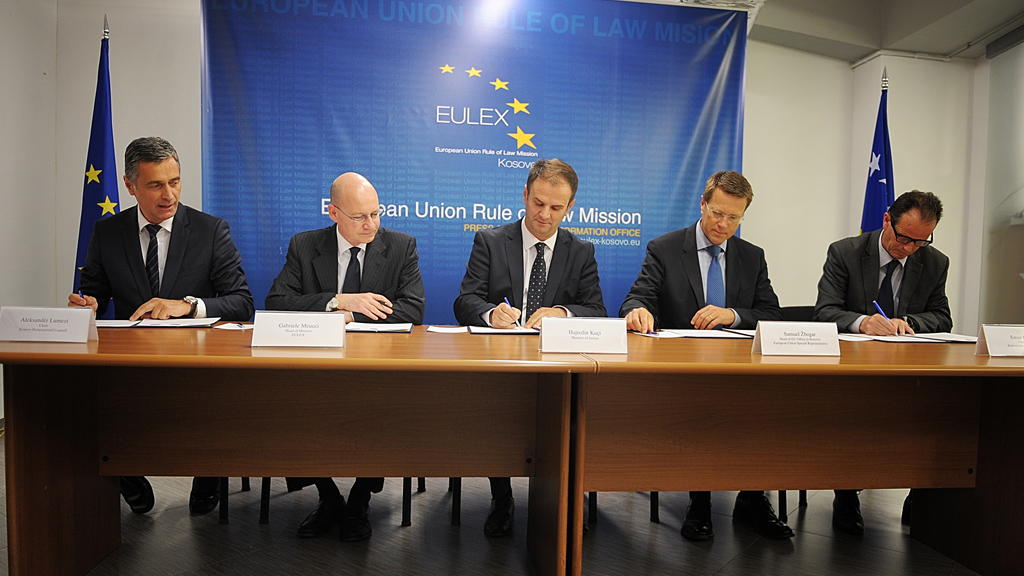 The Joint Rule of Law Coordination Board (JRCB) composed of the Ministry of Justice of Kosovo, the EU Office in Kosovo/EUSR and the EULEX Mission today renewed their Compact commitments by signing a second Compact on Rule of Law in Kosovo. After the Compact was originally signed in November 2012, this revised Compact underlines the joint commitments for strengthening the rule of law in Kosovo. A number of concrete Compact actions underpin this overall commitment. They address such issues as strengthening police, customs, correctional and judicial institutions across Kosovo, which will help to satisfy the requirements of Kosovo’s visa liberalization and EU accession inspirations. The Compact also calls for enhancing Kosovo’s anti-corruption capacities and its ability to fight organized crime, while remaining vigilant to address inter-ethnic crimes.

EULEX Head of Mission, Gabriele Meucci, welcomed the agreement as a vital step on the way to further enhance the rule of law in Kosovo. “It provides us with an endorsement needed for any reform process. From a practical point of view, I am pleased with the catalogue of concrete action lines agreed upon, which will ensure the continuation of fostering the rule of law beyond the current EULEX mandate. It was agreed to allocate the necessary resources and focusing of our work so as to reach the overall joint Rule of Law Objectives as set out in this Compact ”, Meucci said.