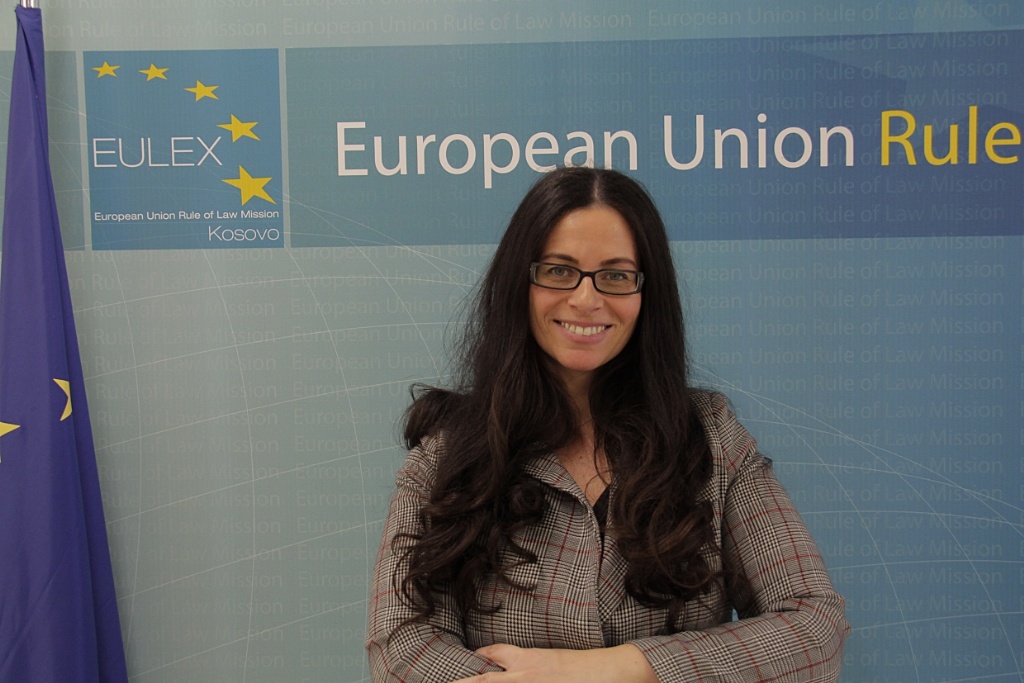 The first thing you notice about Chiara is her contagious smile that transmits her fragile, yet intense beauty. But underneath that fragility there is a strong character that reflects a contemporary woman: powerful and resilient. This resilience fits perfectly with what she does, a thematic lead monitor on gender-based violence cases in EULEX.

Although there are numerous cases where men are victims to such violence, worldwide however, the number of female victims of gender-based violence are overwhelmingly higher. UN Women have conducted a series of studies to unearth facts and figures on many types of gender-based violence and according to their reports, it is sadly estimated that 35% of women worldwide have experienced either physical and/or sexual violence. Whereas, some national studies show that up to 70% of women have experienced physical and/or sexual violence from an intimate partner in their lifetime.

With these facts in mind â and also working in the local context â Chiara is very pleased that under our new mandate, the Missionâs Monitoring Pillar has a dedicated thematic lead on gender-based violence cases. âThis has been a landmark step in the Mission and our mandate. Having a specific thematic lead on gender-based violence casesâ she emphasizes.

âAs a Mission we always dealt with domestic violence and conflict-related sexual violence, but now we have the mandate to focus on how the whole system works â the whole mechanism of responses to domestic violence and gender-based violence cases,â she explains âSo, I think itâs a great opportunity for the Mission and for me both personally, professionally and for the Unit, I really hope that we can achieve a lotâ.

When she first joined EULEX back in 2011, Chiara worked as a legal officer with the Judges Unit in Mitrovica, and her team dealt with war-crimes cases. âIt was a very challenging and sensitive experienceâ, says Chiara. âThe sensitivity aspect of my job remains the same, however, with what I do todayâ, she further explains.

When dealing with such cases there is a visible gap between merely passing and actually implementing legislation on gender-based violence cases. The response mechanism and the coordination to these types of cases still has a long way to go until the legislation is implemented effectively.

âStarting from the cooperation between the different institutions which respond to gender based violence cases, the interaction between institutional providers such as Ministry of Justice, Ministry of Labour and Social Welfare, Kosovo Police, Prosecution, Courts, Centres for Social Welfare, Shelters, Institute of Forensic Medicine, civil society and international organizations there is a lot of work to be done,â she points out.

âAnother important aspect of this process is also the need for awareness raising to affect the cultural mind-set in response to these sensitive cases. There is a solid base to move forward with things, but a lot of work has yet to be doneâ, says Chiara.

She illustrates further how vital it is to have all stakeholders on board to make progress. Emphasis is put on local counterparts taking a leading role, and the importance of cooperation through the existing forums and platforms where EULEX is also active and supportive.

EULEXâs work in domestic and gender-based violence cases has been recognized by local counterparts for years now â the thematic lead monitoring is a continuation of that legacy. Cooperation between the Mission and our local counterparts is already well established and strong.

In this sense, Chiara is very familiar with the local circumstances âshe arrived in Kosovo in 2009 and during the last decade she was present in different periods of change that Kosovo went through. Back then, she was with the OSCE as a court monitor and a part of her job was also to raise awareness about the response mechanisms on domestic violence and access to free legal aid for victims, which gives her quite some retrospective comparison to the situation today.

Going down memory lane, Chiara takes us on a short exotic trip all the way to Brazil, where she worked in education programmes for kids and youth. âIt was very beautiful and challenging in the aspect of work. I spent three years there and was amazed with the culture, people and diversity,â she says. â

âJust by being present sometimes itâs enough to help someone. Working with kids who had difficult childhoods there, proved to me that at times a simple hug, a nice gesture can have a strong and positive impact on someoneâ, she nostalgically recalls.

From Brazil to the Balkans, ten years after, Chiara talks about all the periods of change that she was a part of while living here. âA lot of changes have happened both in society and at the institutional level. Itâs great to witness a country in its developmental stages and see what can be done.â

âWhere I come from in Italy - Rimini â everything is already in place, so I didnât really have the chance before to see the birth of a country from scratchâ, says Chiara.

She has been away from Italy since she was 18 when she left and went to the UK to complete her studies in European Law and Human Rights. She hasnât lived in Italy since. But her family keeps her sense of roots and belonging very strong, by showing immense support and love throughout the years.

âI always knew where home was, thanks to my family. Itâs been fundamental to have such support and love, especially when you are gone for such a long time. So, I always had strong rootsâ, she fondly explains.

Her family owned a tourism and hospitality business in Rimini, so by working together, Chiara grew up surrounded by a strong sense of family. This type of work also instilled in her the importance of solidarity, hospitality, working together and unity, which is essential also in the work she does today.

And she stands firmly on her professional and personal beliefs being raised in a family where females and males were and are treated equally.

âMy mother remains the biggest source of inspiration to me. In the late 1960s when Italy was still recovering from the Second World War, she left and went to the UK to study English literature and teaching. Her decisions back then, her independence and determination have shaped me later on to become who I am todayâ, says Chiara with modest pride in her voice.

But, female empowerment is not an isolated process where only women are involved and expected to root for each other and show support. To achieve true gender equality, both men and women have to be equally involved in this process from the moment they start understanding the world around them.

Chiara elaborates this by giving the example of her parentsâ unity and how their relationship shaped her perspective on gender equality.

âMy mother has always been a great woman but also with a great man next to her.  You have to involve both men and women in the cycle of life if you want to see satisfying results on how they treat each other. Goals in life are reached if there is unity between men and women, and this is important especially now when we are talking about gender equality and mainstreaming. Itâs fundamental to have boys and men part of the processâ.

She feels even stronger about this, now that she is going to become a mother to a baby boy. âItâs so important how we educate our boys, the values we give them. I was thinking about this, how challenging it is going to be. Challenging and essential to what direction we give them in life in terms of the immense importance of values and respectâ, emphasises Chiara.

A big part of her life and passion is also traveling.  âI love it. The sense of the unknown, meeting new people, learning about new cultures, listening to other languages.

âSo far, my favourite is Brazil because itâs so huge, diverse and rich in culture.â

For the time being, exploring Asia remains on her bucket list.

While our pleasant conversation comes to an end, Chiara expresses her joy, happiness, fears of the unknown and excitement of the upcoming blessings of motherhood and life ahead.