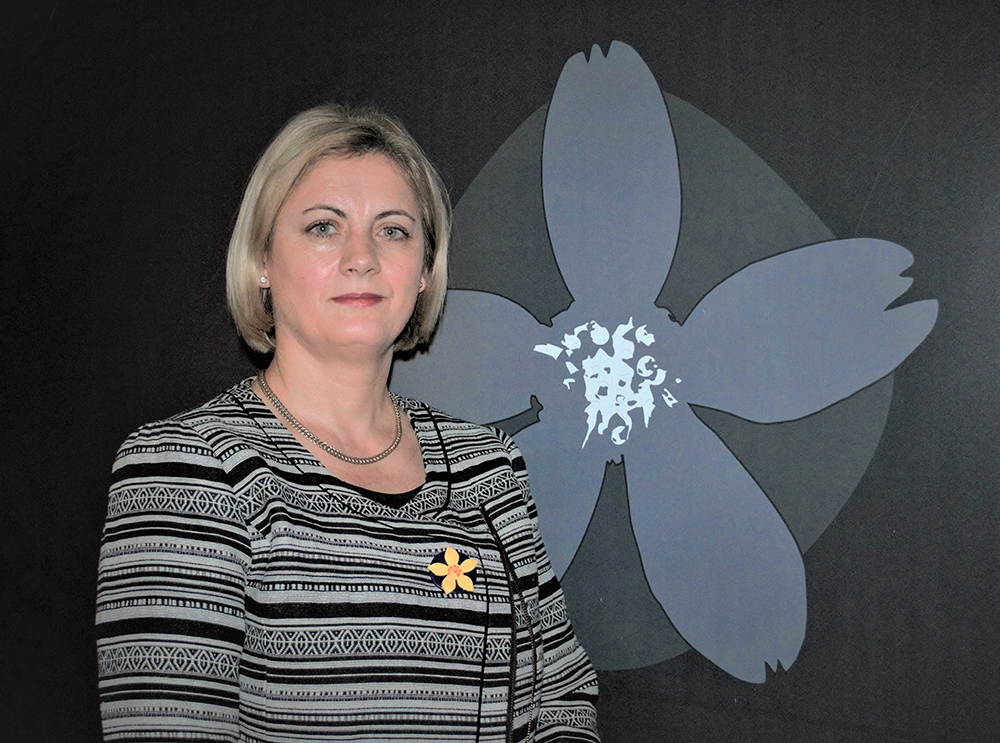 Life happens while we are busy making plans. So weâre told. And at times life has a bigger, greater plan for us. Such is, Feride Rushitiâs journey towards becoming one of Kosovoâs top leading women in tackling one of the most sensitive issues: rehabilitation of victims who have survived various types of torture, in particular survivors of sexual violence during the conflict in Kosovo. It all began in the late 90âs when Feride was just about to complete her medical studies and was soon to become a gastroenterologist. During the 1998-99 Kosovo conflict, Feride started working in one of the refugee camps in Albania where she was helping the distribution of medicine to Kosovo people who had fled their homes and were at the time based in refugee camps in Albania.

During this time, she had the opportunity to be in direct contact with women and also men who were survivors of torture. âIt is the horrific stories that I heard and that I saw during those days that made me completely change my lifeâs goals and what I wanted to do. It is when I decided to leave my aspiring career plans as a doctor and become the voice of victims who had survived such appalling tortureâ, recalls Feride â her eyes welling up.  âI never regret this decision. I stand by my decision to help women who have had the destiny to survive tortureâ.

âI founded the Kosovo Rehabilitation Centre for Torture Victims (KRCT) together with my team of fellow activists in September 1999. We wanted to create a safe haven for persons who had undergone various types of torture, a trusting environment where the victims could confide and where they were able to tell their stories. When we decided to establish the centre, we were really unaware of how challenging it is going to be to develop such an institution. However, with the passing of time we have created a professional team that ensures the victims also receive psycho-social treatment as well as medical treatment when needed. During all these years, I have been able to see tangible results of our work, which gives me more energy to move forwardâ, continues Feride.

KRCT is the first organisation in Kosovo to introduce the notion and the possibility of psycho-social treatment. This was a challenge on its own. âApproaching the community and explaining the existence of this type of treatment was sensitive and we had to be cautious. Our centre prepared very informative brochures whereby we would explain to people how they could identify their types of trauma based on different types of behavioural changes and reactions. This was a time when we achieved to identify our target groups and began our work with them. At the same time, we coordinated our treatment methods with the then existing and still fragile institutions of family medical centres to raise the need of treating psychological traumas of survived victimsâ, explains Feride.

She was in fact, one of the first doctors turned activists, to recognise the need for treatment of psychological trauma for refugees fleeing the violence, particularly among women and minority groups. She pioneered a very unique multi-disciplinary approach to address the needs of torture victims, whereby she envisioned her organisationâs approach to provide psycho-social support, legal assistance, medical treatment and policy advocacy. This approach was made possible through the local, regional and international networks and numerous training courses that the centreâs team received in order to make sure that proper type of help is being offered to persons in need.

âWhile attending various conferences of this nature, victims of Croatia, Bosnia, Uganda, Rwanda, etc. were always mentioned. But, Kosovo was not on this map. This is when we saw the need for documenting cases of torture and also doing research to prove various cases so that this data could be internationalised and presented to our international network organisations and partners. So, now a core part of our Centre is also our documentation and research work, which really helped put Kosovo on the map when it comes to identifying and documenting stories of torture survivorsâ, explains Feride, adding that sexual crimes were treated as a taboo in our fragile post-conflict society.

âWe are dead among the livingâ, was the most common description that the victims would give themselves, recalls Feride. This was because the support that they wanted and so greatly needed was nowhere to be found â not in the family nest, the society or the relevant institutions.
The initial, biggest challenge to overcome was with the government institutions, which showed a tendency to treat the victims by adopting separate legislation. This is where the Kosovo Rehabilitation Centre for Torture Victims intervened by lobbying and insisting that sexual crimes should be treated by the Law on the Protection of War Values, impartially from the other types of crimes that were committed during the conflict in Kosovo. The KRCT advocacy materialised in the amendment of the aforementioned law in March 2014, whereby the sexual crimes victims were included in the legislation. This was followed up by the development of secondary mechanisms to ensure the implementation of the law, where Ferideâs organisation took an active role.

These important steps also resulted in a pension fund that was created for survivors of sexual violence during the Kosovo conflict. Since the legislation entered into force, five hundred persons have come forward to claim the status of a survivor of sexual violence. These claims are thereafter estimated by the Government Commission on Recognition and Verification of the Status of Sexual Violence Victims during the conflict - created for this purpose, ensuring an adequate treatment mechanism for the victims of sexual violence during the conflict.  20 years of advocacy work in support of survivors of sexual violence has put the Centre on a global map, and this has been internationally recognised as a success story by the âGlobal movement of sexual violence survivorsâ, a foundation led by the world-renowned Congolese doctor, activist and Nobel Peace Prize winner Dr. Denis Mukwege. With their main headquarters in The Hague, this movement supports survivors and uses national and international advocacy to achieve lasting, systemic change. In this line, KRCTâs work and advocacy is acting as a part of the state mechanism to drive and contribute in achieving systemic change for this vulnerable and sensitive group of the Kosovo society.

This rollercoaster of events, challenges and visible results have led to a turning point in Ferideâs life â both personally and professionally. Last year, she was awarded by the United States Department of State the International Women of Courage Award, which perfectly coincided with the landmark ruling of the Kosovo government on awarding pensions to victims of wartime sexual violence. She was among ten women in the world to be nominated and granted this prestigious award.

When she received the news from the U.S. Embassy in Pristina, Feride could not help but recall how in a mere second, twenty years of memories flashed back to all the crucial moments that led to this day. âI thought about the moments when I cried together with the women who shared their horrendous storiesâ¦ I thought about the challenges that we faced as an organisation and as a society to bring at least a little bit of justice for victims of sexual violenceâ¦â she recalls.

The trip, the experience and the ceremony in Washington was priceless as well. Feride tells us that all the other nine women she met were from different corners of the world. All of them came from very different backgrounds, shared very different stories of courage, but they all had one thing in common â an enormously powerful will and passion for change.

The rest of the working trip in the U.S. was no less special â Feride visited the state of Florida where she worked closely with civil society representatives to learn best practices on how this significant community influences policy making and policy changes on local and federal level.

Putting a momentary closure to her professional life story, Feride once again goes back in time and touches upon her passionate humanitarian side of personality, by revealing how she braided hairs of young girls while she sang to them, as a part of the emotional rehabilitation process that they had begun during the exodus from Kosovo.

As our long, pleasant and emotional talk comes to an end, Feride switches off albeit for a second from her working life to share that cooking at home for her loved ones is her getaway to relaxation.

Her serenity though, is being a mother of two young daughters. It is not by chance, one might say, that extraordinary women like Feride raise the future women leaders of this striving world.