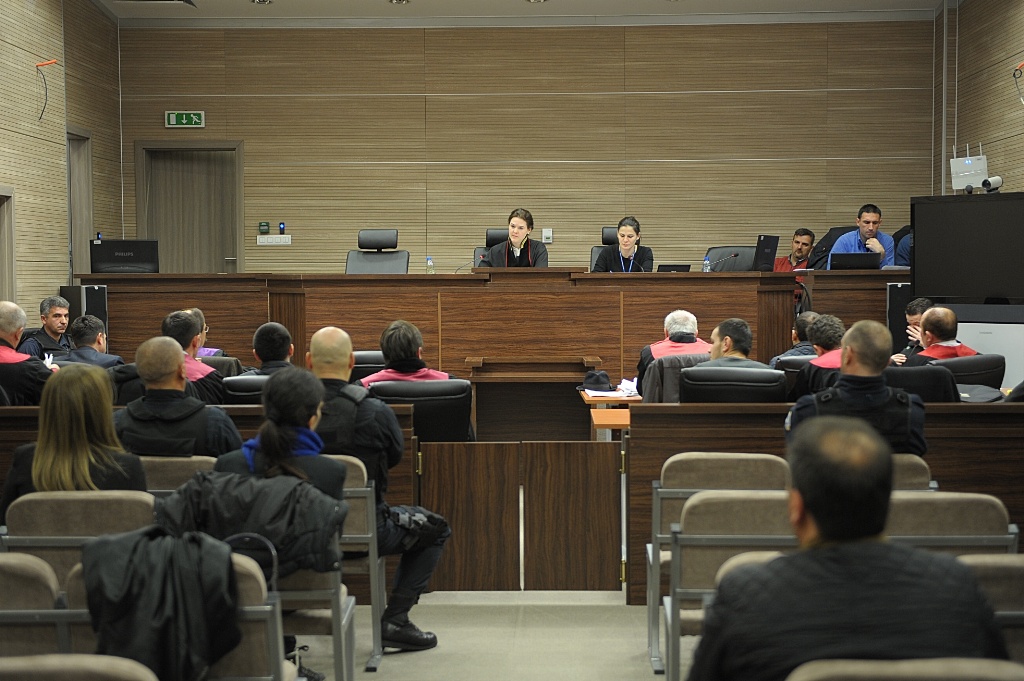 The main trial against five defendants accused of various terrorism related offences started on 11 February, at the Palace of Justice.

With strict security measures in place, the defendants, who are in detention in remand since 5 November 2013, were brought to the court.

The new facilities at the Palace of Justice offer the conditions for a fair and transparent trial.

The court room envisaged space for all sides – the judges, court recorders, translators, prosecutor, legal officer, defendants and their defence lawyers. In addition, the room accommodated also the journalists and the family members of the defendants, who were able to attend the trial, since the judge decided the trial to be open both for the public and the media.

The indictment was filed by international SPRK prosecutor on 23 January 2015.

According to the indictment, five defendants are suspected of various terrorist offences: from illegal possession of weapons, to production of explosive materials, creating an underground terrorist cell, spreading religious hatred over social media to aggravated assault on Christian Missionaries in Kosovo, amongst others. One of the defendants remains at large whereas another entered a guilty plea agreement with the international prosecutor.

The presiding judge opened the session and the cameras of the media were asked to leave the court room after 10 minutes, as foreseen by the law and judge's order.

The prosecutor read the enacting clause, which is briefly summarised below: "After extensive and detailed investigation led by EULEX Prosecutor in cooperation with Kosovo Police, defendants faced charges including preparation for terrorist activities on the territory of Kosovo, participation in terrorist group, unauthorized buying weapons and unauthorized possession of weapons. The head of the group also faced a charge of organization and direction of the terrorist group in Kosovo as well as commission of terrorism by participating in killings, hostage takings and various military operations of ISIS terrorist organization in Syria. "

The defendants are charged with various terrorism-related offences, including – organization and direction of a terrorist group; participation in a terrorist group; the preparation of terrorist offences; unlawful production of explosive materials; unlawful possession of weapons and explosives, inciting religious hatred and aggravated assault in the territory of Kosovo, as well as the commission of terrorism within the territory of Syria.

The defendants were arrested in Pristina attempting to purchase a large number of military assault firearms and munitions. The arrests were part of ongoing investigations by Kosovo Police (KP), Directorate against Terrorism, for aggravated assaults committed against two Christian missionaries from the United States of America.

After the defendants' data was confirmed, the prosecutor read the enacting clause of the indictment and after the judges verification as to whether the defendants understood the charges against them, they had the opportunity to enter their pleas.

The next session of the main trial will continue on 3 March 2015.