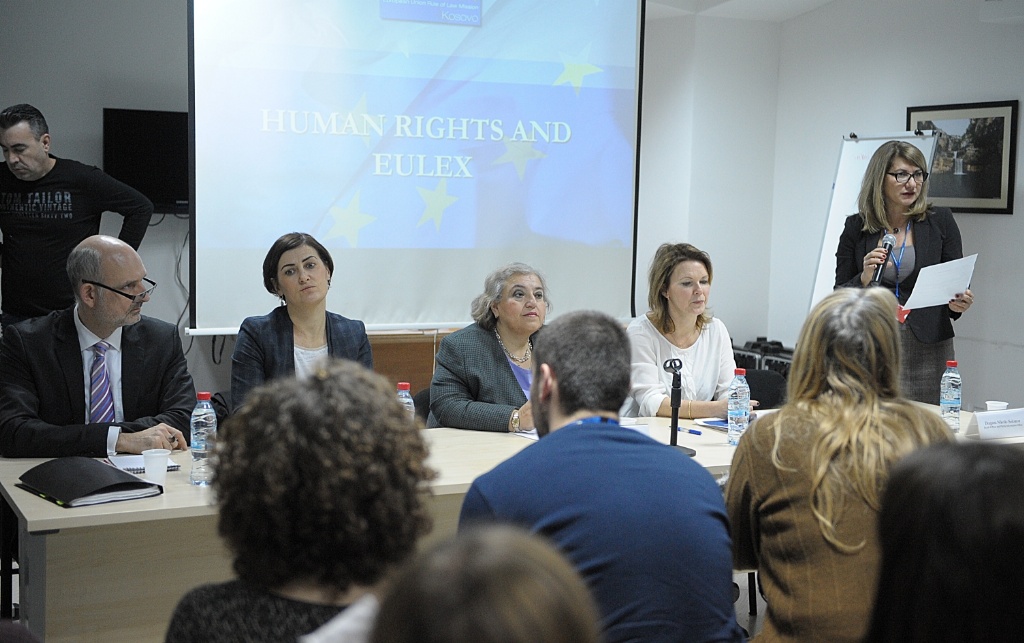 Yesterday, students from the European Masterâs Degree in Human Rights and Democratisation (EMA) and European Interuniversity Centre (EIUC), Venice visited the EULEX Mission in Kosovo. Approximately 120 graduate students were briefed on the challenges of implementing the EULEX mandate.

Ms Alexandra Papadopoulou, Head of EULEX Mission in Kosovo, as a keynote speaker elaborated on EULEX mandate in the wider Kosovo context, engaging with students through a question and answer session that lasted over an hour.

Marianne Fennema, Head of Human Rights and Legal Office, and two judges at EULEX, Ana Adamska and Werner Kannenberg were also present during the lecture. EULEX judges explained their responsibilities within the Missionâs executive function highlighting their role of applying justice in Kosovo. Ms Fennema explained that human rights represent an integral part of EULEXâs application of rule of law, being the only CSDP Mission with executive function.

This marks the fourth consecutive visit from EMA, making it an annual lecture. EMA is an intensive one-year academic programme where students from around the world study about human rights and democratisation.   âIt was interesting for us because most of us didnât associate the European Union with human rights, more like economic integration. Coming here and seeing how itâs done on the ground is invaluable for us as students,â stated one student after the briefing.

According to Marijana Grandits, the Academic Coordinator, the purpose of the visit was to âdo a reality check, because they sit in class and hear about all these beautiful conventions, but what does it mean on the ground? Students get to see the implications and a chance to see how it is applied.â