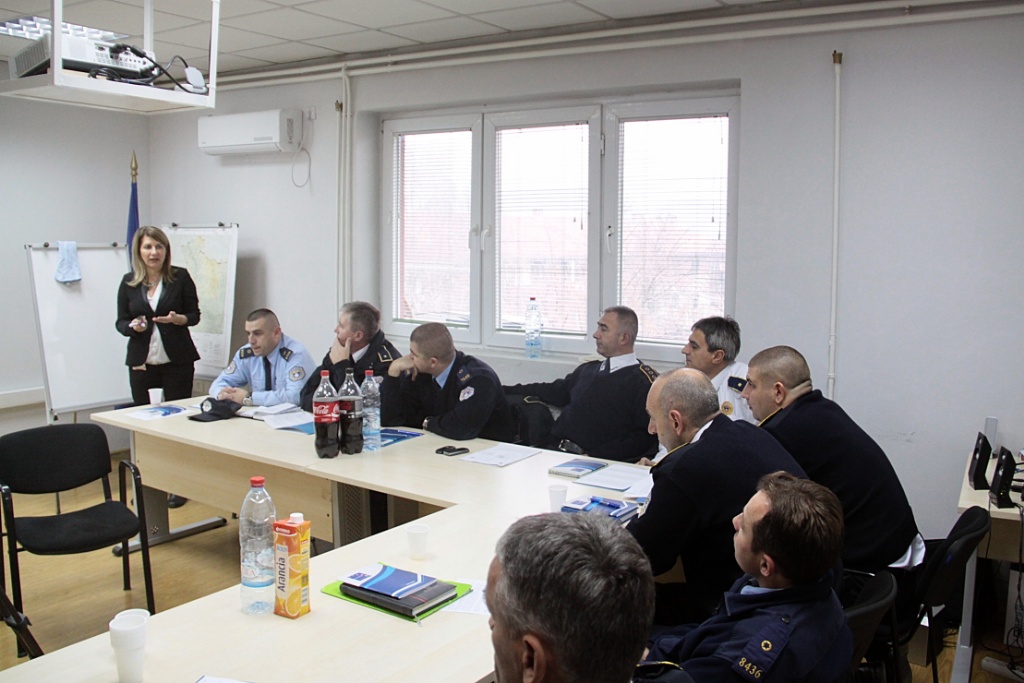 On Wednesday, December 16, EULEX’s Press and Public Information Office (PPIO) conducted a media training and communication workshop for Kosovo Police (KP) officers from police stations in the north of Kosovo. The training, aspiring to strengthen the skills of police to communicate with media and the public, gathered 14 KP officers from the Zubin Potok, Leposavic, Zvecan, and north Mitrovica police stations at EULEX’s north premises at the EU House.

The training was led by PPIO Deputy Head, Dragana Nikolic-Solomon, with opening remarks given by Chief Regional Advisor of Police Strengthening, Pascal Scordia.

Over the past years media has embraced new technologies, rapid communication, and online social networks, and has empowered citizens to report on what they encounter almost instantaneously. This changed media landscape in turn commands a new approach from law enforcement authorities to comprehend the public perception of their work and embrace novel communication methods with journalists, media outlets, and the public in their communities.

The workshop endeavoured to achieve these tasks by demonstrating examples of new media, showing how relationships can be improved with journalists, and providing the officers with key statistics at how they can improve their communication with the public and in front of the camera. With most of the officers having limited exposure to media in the past, they welcomed suggestions on facets such as improving their body language and focusing on key aspects of the messages they are conveying. Ms. Nikolic-Solomon provided the officers with several examples of citizen journalism in neighbouring countries, showcasing the increased need for law enforcement authorities to demonstrate professionalism and proper behaviour at all times.

EULEX’s Coordinator north, Ian Bancroft, joined the workshop to speak at length about the example of the Royal Ulster Constabulary in Northern Ireland and how its reform was a key element of the peace process following inter-ethnic conflict.  Bancroft emphasized the importance of dealing with perceptions about security, arguing that even though statistics might show a reduction in crime, citizens may not feel any safer.

The second part of the workshop, allowed the officers to assess case studies, deliberate on them in groups, and lead a press conference among mock journalists while being recorded on camera. Afterwards, they were allowed to view their enactments and were provided with inputs and suggestions on how they can strengthen their communication and overall performance.

The workshop was part of EULEX’s support to KP Regional Command North and the four police stations in the area of responsibility. EULEX’s Strengthening Unit and PPIO will continue to provide capacity strengthening support for Kosovo Police to communicate with the media and the public through similar initiatives.