The EU Rule of Law Mission through the lens of... 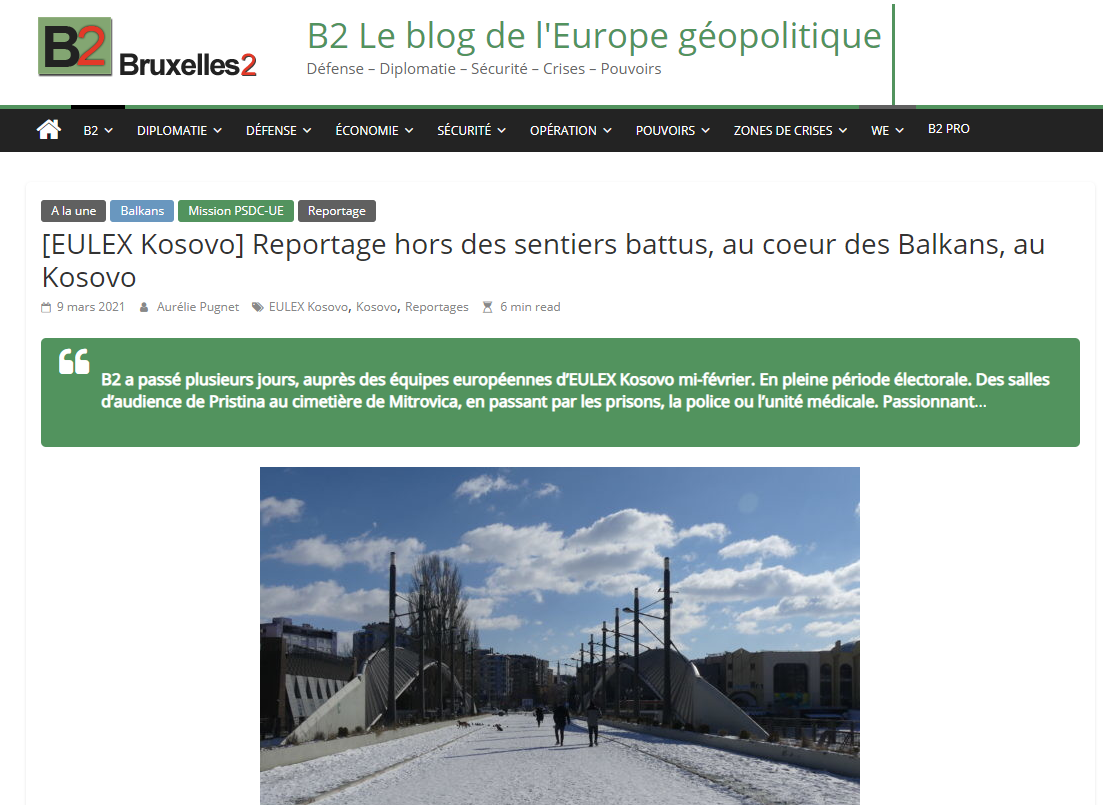 The EU Rule of Law Mission in Kosovo (EULEX) has had its fair share of local and international media coverage. But how in-depth has our Mission been covered so far? Which are the untold stories?

In mid-February, AurÃ©lie Pugnet, a journalist for Bruxelles 2 (B2), a French-language news website specialized in defence and security issues, spent several days in EULEX Kosovo and interviewed many staff members, including the Head of Mission. To get a better understanding of the Missionâs daily work, AurÃ©lie Pugnet also visited all Mission premises, the Institute of Forensic Medicine, the cemetery in North Mitrovica, and the Palace of Justice. As a result, B2 published a series of articles on the different strands of EULEXâs work, explaining in-depth the Missionâs mandate and activities.

B2 spoke with the Head of EULEXâs Case Monitoring Unit, who explained the work his unit does: robust monitoring of selected cases at the entire chain of the criminal justice system, namely on police, prosecutorial and judicial level. Together with EULEXâs Thematic Lead Monitor for Crimes under International Law, the B2 journalist attended the announcement of the verdict in a court case and witnessed first-hand how EULEXâs robust monitoring works in practice.

During her visit in EULEXâs Medical Unit, the journalist got to see its unique role: how it provides primary and emergency medical care to EULEX staff members and other patients, and how it provides medical training to our colleagues and to our Kosovo counterparts.

The Missionâs work in helping to determine the fate of missing persons from the Kosovo conflict is also explained in detail in a separate story. Our experts, who are embedded in the Institute of the Forensic Medicine, are working side by side with our local counterparts to shed light to the fate of the missing. The journalist visited the North Mitrovica cemetery together with EULEXâs exhumation coordinator, who thoroughly explained the entire process: from the identification of the location where the remains are found to the handover of the remains to the missing personâs family.

EULEXâs Formed Police Unit (FPU) and the recent arrests by the Specialist Prosecutorâs Office (SPO) conducted with EULEXâs operational and logistic support were also discussed during AurÃ©lie Pugnetâs visit to Kosovo. The journalist got a thorough briefing by the Deputy Head of Mission on the daily work of the FPU and witnessed a crowd and riot control exercise at the FPU premises in South Mitrovica.

The Missionâs work to facilitate the exchange of police information between the Kosovo Police and Interpol, Europol or the Serbian Ministry of Interior has certainly been a topic, which has not been explored that much so far. AurÃ©lie Pugnet met with representatives of EULEXâs International Police Cooperation Unit, who briefed her about how this exchange of police information works and why it is needed.

The B2 journalist also interviewed our Head of Mission, Lars-Gunnar Wigemark, who said about EULEX: âFrom the beginning, EULEX has been a very unique mission. It has since gone through a metamorphosis. It started its activities in 2008 with more than 3,000 people, more than half of whom were police officers. There were also judges, prosecutors, investigators, etc. We helped set up the customs system, which today provides more than half of budget revenues. We have trained the police, helped integrate the Kosovo Serb police officers in the north. All in all, more than 10,000 people worked in this mission, more than half of whom were locals. A certain number of them hold very important positions [now in the Kosovo system].â

The detailed B2 articles are available online only to subscribers. To read a summary, check out this link (in French): https://www.bruxelles2.eu/2021/03/eulex-kosovo-reportage-hors-des-sentiers-battus-au-coeur-des-balkans-au-kosovo/