Ambassador Apostolovaâs comments on EULEX during...

Ambassador Apostolovaâs comments on EULEX during an interview with KTV 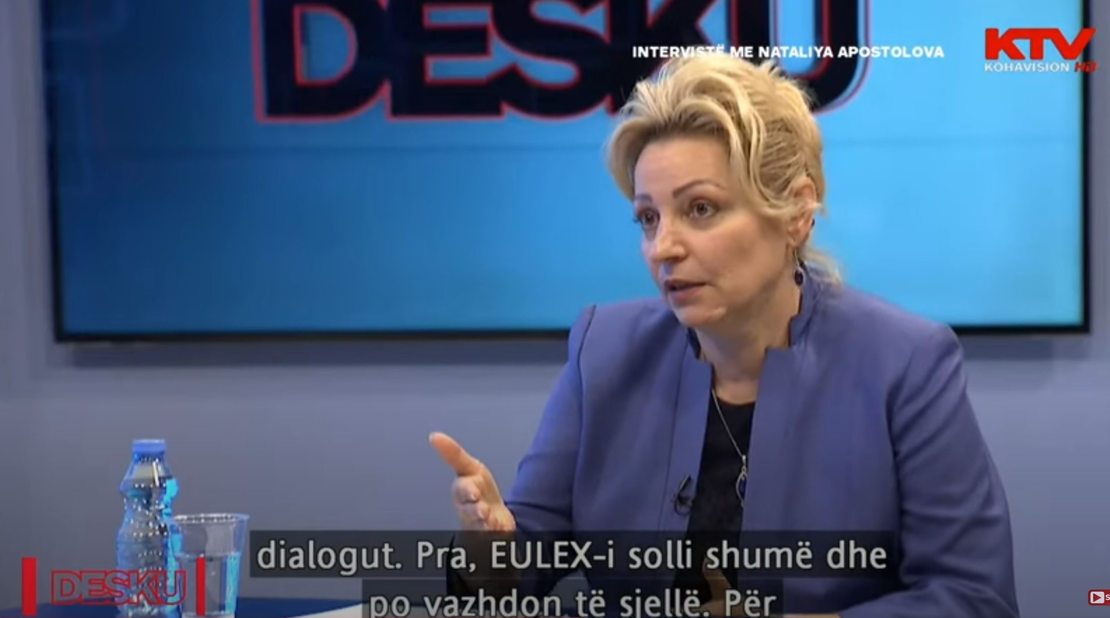 On 23 June, the Head of the EU Office in Kosovo / EU Special Representative, Nataliya Apostolova, was Agron Bajramiâs guest at âDeskuâ on KTV. During the interview, Ambassador Apostolova also spoke about the work of the European Union Rule of Law Mission in Kosovo (EULEX Kosovo).

Agron Bajrami: We are talking about justice system which brings me to the issue you have already mentioned - the EULEX. A lot of people have expected that the work of EULEX here would be some sort of careful transition from a non-functional justice and police system to a very functional police and justice system. And the years that the EULEX has spent here have not brought that and a lot of people do blame EULEX, partly at least, for this as well. How do you respond to the criticism of EULEX which is again under the EU presence here?

Apostolova: You are right. The EU is represented with many faces in Kosovo and this is very good. The EULEX is an extremely complex CSDP mission and I would not agree with you that EULEX has not brought something positive.

Bajrami: I am not saying that, I am just saying that it did not brought enough positiveâ¦

Apostolova: Exactly, I think this is maybe the right way to describe it and you have to know that there are also some limitations as to what EULEX could have done during all the years it has been here. These limitations are not because EULEX did not want to do it or because EULEX was not capable of doing, but the legal process as such necessitated as well some kind of cooperation and delivery from the justice system of Kosovo as well. So, it is complex. I also want to mention that EULEX is not only justice. EULEX brought here customs officers, EULEX supported the dialogue for many years, including the Integrated Border Management (IBM). EULEX was working very much on the Justice Agreement which is again a Dialogue Agreement for the north. So, EULEX brought a lot and is still bringing a lot. Now EULEX has gone out of these executive functions already and they are helping in dealing with the cases which they have already transferred to courts and judiciary and they are monitoring these cases, they are mentoring and advising. And this is very helpful for your judges. Also, they are so much deeply involved with the forensic, which is not still developed in Kosovo. And I think that everything what EULEX is doing for the moment is very normal after all these years and everything what they have done, this actually a circle when they were concentrated on, is so much helpful for the Kosovo judiciary. So, I would argue always with people who are blaming EULEX for all the malfunctions in the judicial area because it is not true to say. EULEX has delivered a lot and I think that Kosovo has to be thankful to all that expertise which was brought here by so many people. It is our biggest CSDP mission.

Bajrami: But of course for the public the EULEX seen mainly through the lens of what is going on with the courts and the investigations of high level crime, war crimes, for which EULEX had an exclusive mandate in the beginning, and the problem is that, as you said, rightly for the Kosovo judiciary that  somehow acts too slowly on dealing with cases. We have noted that same feature with EULEX in the past. When they had investigated some cases, they were not actually fast.

Apostolova: I cannot comment on that. I am commenting on four years in which I think that Kosovo got a lot of support and a lot of know-how and a lot of fantastic judges and prosecutors who were working daily with your institutions. And I know it very well, because some of these people who are working there and functions which they were performing afterwards were transited to my office. Because of the slowing down of the EULEX functions and some of these functions were transited to my office. And I see these fantastic people who are so much dedicated who are really working day and night with your institutions and I really want to praise them because it is not easy, believe me.