The KPCC Road to Success: Over Forty Thousand... 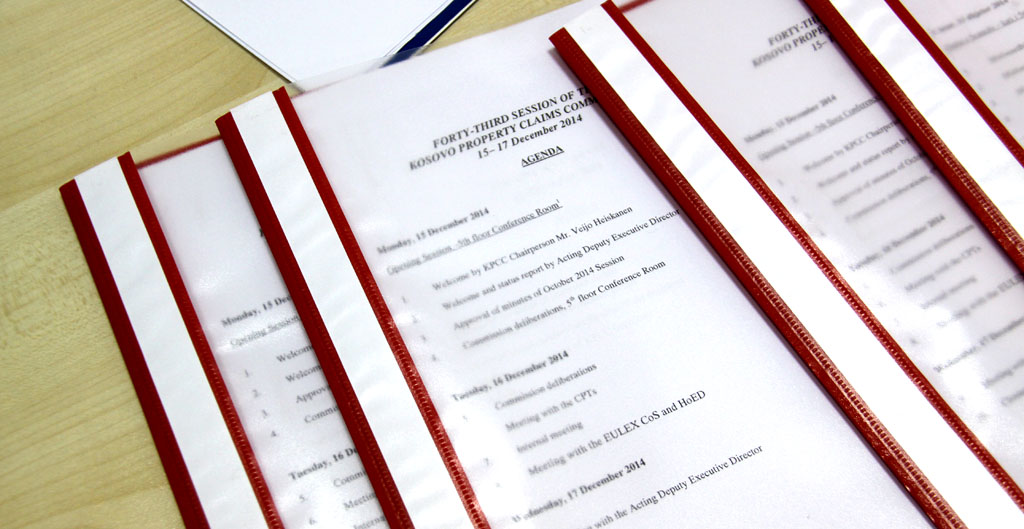 Final session of the Kosovo Property Claims Commission, KPCC, was held on 16 December in order to resolve the remaining registered property claims. The two international and one local commissioner decided on the last remaining 178 cases.

This finally closed the chapter on the adjudication of current property cases stemming from the 1998/99 Kosovo conflict that were registered with Kosovo Property Agency (KPA). With over forty three thousand cases adjudicated, the KPCC record seems impressive.

Decisions taken by the KPCC are subject to a right of appeal to the Supreme Court of Kosovo. The KPA appeals panel is composed of EULEX and local judges.

According to Violeta Demaj, KPCC Chief of Office, the resolution of the conflict-related property claims is an important process greatly impacting the stability of a post-conflict society.“This is a key step towards the reconciliation between the citizens, neighbours and friends. In order to resolve the case, we often go beyond the judicial support. We provide technical support and transport for our clients, to ensure their cases are processed in a fair and just manner”.

According to Demaj, some initial hostilities between several claimants can be easily solved. “There was a case when the parties involved were quite tense. We received notes from the processing office, that one of the claimants is aggressive. During the session however, when the claimants met, it turned out that they hadn’t seen each other for a long time. They were so happy to meet again that their meeting was quite warm-hearted. Naturally, the case was very quickly solved”, Demaj pointed out.

KPCC is also engaged in solving property disputes in northern Kosovo. Demaj stresses that the KPCC treats all cases equally, regardless of the ethnic background of the claimants. “Everyone has equal rights to their property. You see lots of stress and suffering. We are happy every time we make a difference to a person’s life. We will continue to work until all claims are solved”, says Demaj.

The road to change and transfer of responsibility is well under way. Demaj hopes that all adjudicated claims would be implemented until the KPCC mandate can be fully handed over the KPCVA over the coming months.

The KPCC is a special claims resolution mechanism which follows the principles of a mass claims proceeding. It was created with the aim to decide on a great number of disputes efficiently, effectively and in a timely manner. This quasi-judicial decision making body, which functions independently within the KPA, successfully completed its mandate with the resolution of all claims resulting from the armed conflict that occurred between 27 February 1998 and 20 June 1999 in respect of private immovable property, including agricultural and commercial property, that had been illegally occupied.

Resolution of conflict-related property claims in a fair, objective and transparent manner, with due respect to rule of law, is one of the major aims of EULEX staff engaged in KPCC. After all, the protection of property gives every person the right to peaceful enjoyment of their possessions, obliging States not to interfere or deprive persons of their possessions or subject their possession to control. This right is enshrined in the European Convention on Human Rights.