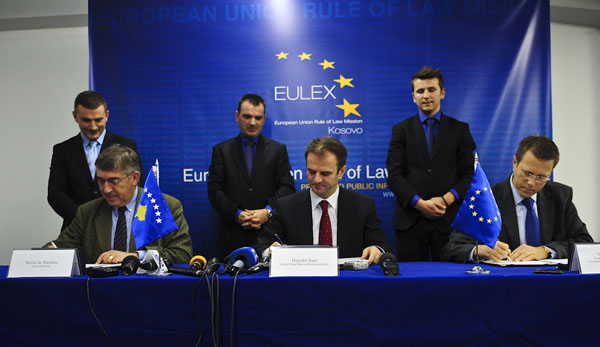 The Joint Rule of Law Coordination Board (JRCB) met today at the EULEX Headquarters in Pristina. The meeting was hosted by Xavier Bout de Marnhac, Head of EULEX, co-chaired by Samuel Å½bogar, Head of the European Union Office and EU Special Representative, and Hajredin KuÃ§i, Deputy Prime Minister of Kosovo and Minister of Justice.

The highlight of the meeting was the signing of the Compact agreement which defines the common rule of law objectives for the Government of Kosovo, EU Office and EULEX. The participants discussed important developments since the last meeting and prepared for implementing joint activities in the coming months.

In his opening remarks, the Head of Mission outlined the way ahead for EULEX following its reconfiguration.

âWhat should not go unnoticed is the fact that the reconfiguration of EULEX is tangible evidence of progress made by the Kosovo Rule of Law institutions. This major shift in operations was primarily possible thanks to the achievements jointly obtained, enabling a reduction of about one third of EULEX overall staffing figures.â

De Marnhac stressed the importance of the Compact, stating:

âThe Compact is a strong signal to the Kosovo public that their government and their institutions are committed to progress in the rule of law and demonstrate their determined approach to EU approximation.â

The Head of EU Office and EUSR Samuel Å½bogar stated that joint cooperation is key to Kosovoâs development in the path to European integration.

"With the joint coordination board, we have established three-way coordination between the Kosovo authorities in the rule of law area, EULEX and the EU Office. In this new phase, progress will be chiefly measured against implementation and EULEX can directly assist in this regard. At the same time, the EU office will link these topics to the wider on-going EU integration processes like the Stabilisation Association Agreement and the visa liberalisation process."

Deputy Prime Minister and Minister of Justice Hajredin KuÃ§i described the Compact agreement as the Government of Kosovoâs pledge for a dedicated cooperation with the international community.

âI think that todayâs signature of the Compact is yet another step that shows the commitment of the Government of Kosovo to Rule of Law and good cooperation with the international community - in this case through EULEX - towards achieving this vital goal. It is a document that represents the joint ambitions of the Government of Kosovo and EULEX, providing concrete actions to be taken on the EULEX capacity development components, the cooperation and hard work that it requires from the local institutions and the manner in which transition of competences will be done by the end of the foreseen mandate. I believe that this document will be a powerful guideline towards strengthening our institutions and ultimately the readiness of our institutions to take over the competences to overall administration of justice.â

De Marnhac, Å½bogar and KuÃ§i signed the Compact agreement in the presence of the leaders of Kosovoâs rule of law institutions during a ceremony that took place immediately after the end of the regular meeting.