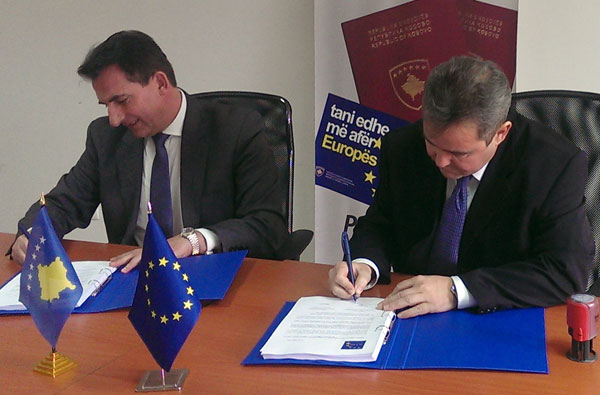 EULEX representatives today handed over to the Civil Registration Agency 984 certified copies of original civil and religious registry books with data on birth, marriage and death for the municipality of MitrovicÃ«/Mitrovica (735) and ZveÃ§an/ZveÄan ( 249).

The copies have been produced and certified in the last month as part of the EU funded project based in Nis, Serbia, involving EULEX, the EU Office in Kosovo/EUSR, the Danish Refugee Council as the implementing partner, and the teams from Kosovo and Serbia.

It is estimated that there are approximately 12,036 original civil registry books. The process of certifying copies of the original civil and religious registry books is direct result from the dialogue agreement facilitated by the EU and reached on 2 July 2011 between Pristina and Belgrade. The project in Nis sets up the first phase of establishing fully reliable and sustainable Civil Registry in Kosovo, an important parameter from the road map on Visa liberalization.

To date EULEX has handed over 10,121 copies of CRBs covering 18 municipalities to the Kosovo authorities, which represent more than two-thirds of the estimated total number of books in Serbia. Following the handover to Civil Registration Agency, the certified copies are hardcover bound in Pristina at the offices of Department of Production of Documents, funded by the EU Office, and subsequently in turn handed over to the local municipal authorities for everyday use in the municipal civil status offices. The process of everyday use of certified copies is followed-up by EULEX.