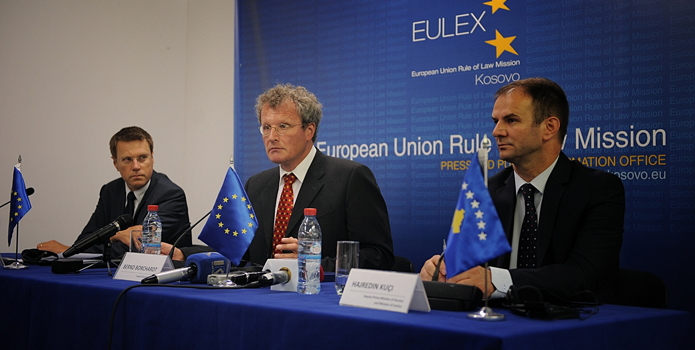 It marked an important moment: With the decision on new EULEXâs mandate, Kosovo has underlined its continued firm support for the Mission as well as its commitment to strengthen the rule of law. While important steps will be taken in transitioning EULEXâs mandate, the three Co-Chairs of the Joint Rule of Law Coordination Board confirmed that nothing has changed in their joint Compact commitment: the setup of sustainable, accountable, independent and multi-ethnic rule of law institutions, free from political interference and adhering to international recognised standards and European best practices.

The Head of EULEX, Bernd Borchardt, referred to a number of concrete examples of progress, such as the establishment of a new Regional Police Headquarters in the north or progress in the Financial Investigation Unit, but also underlined that more needs to be done. He referred to agreed roadmaps to strengthen rule of law institutions, whose implementation was partially hampered by the lack of financial and human resources. âEULEX stands ready to support Kosovo. EULEX is an essential tool of the EU to help Kosovo to build rule of law and move on its path towards the EU,â he underlined. âThe focus of the next two years will be on Â´working togetherÂ´. Based on the Compact, our partnership will be further strengthened.â

The Deputy Prime Minister/Minister of Justice, Hajredin KuÃ§i said that Kosovo has reached a number of important objectives and that he feels that Kosovo institutions are now strengthened and more capable in addressing rule of law challenges. âAs a result we are undergoing a process of transfer of competencies from EULEX authorities to Kosovo institutions. Increased competencies indicate also more responsibilities on Kosovo institutions to continue strengthening their capacities and ensure a sustainable and efficient justice system. Therefore, the Compact tracking mechanism serves also as a tool to identify the challenges and address them furtherâ.

The Head of European Union Office/EUSR, Samuel Å½bogar stressed that the EUSR/EU Office and EULEX stand ready to support local institutions in their efforts to tackle the rule of law issues. âWhilst the EU gives a breadth of assistance to Kosovoâs Rule of Law institutions through project assistance such as IPA, Twinning and TAIEX, the Compact Progress Report plays an especially important role in highlighting technical progress in fulfilment of benchmarks set out in the EU approximation processâ, Å½bogar said.

The Compact was signed on 12 November 2012. The Joint Rule of Law Coordination Board (JRCB) is the main forum to discuss joint rule of law topics and to oversee the implementation of the Compact. The Compact supports Kosovoâs EU integration processes, which include the Visa Liberalisation Dialogue, the Stabilisation and Association Process Dialogue and the Structured Dialogue on the Rule of Law.