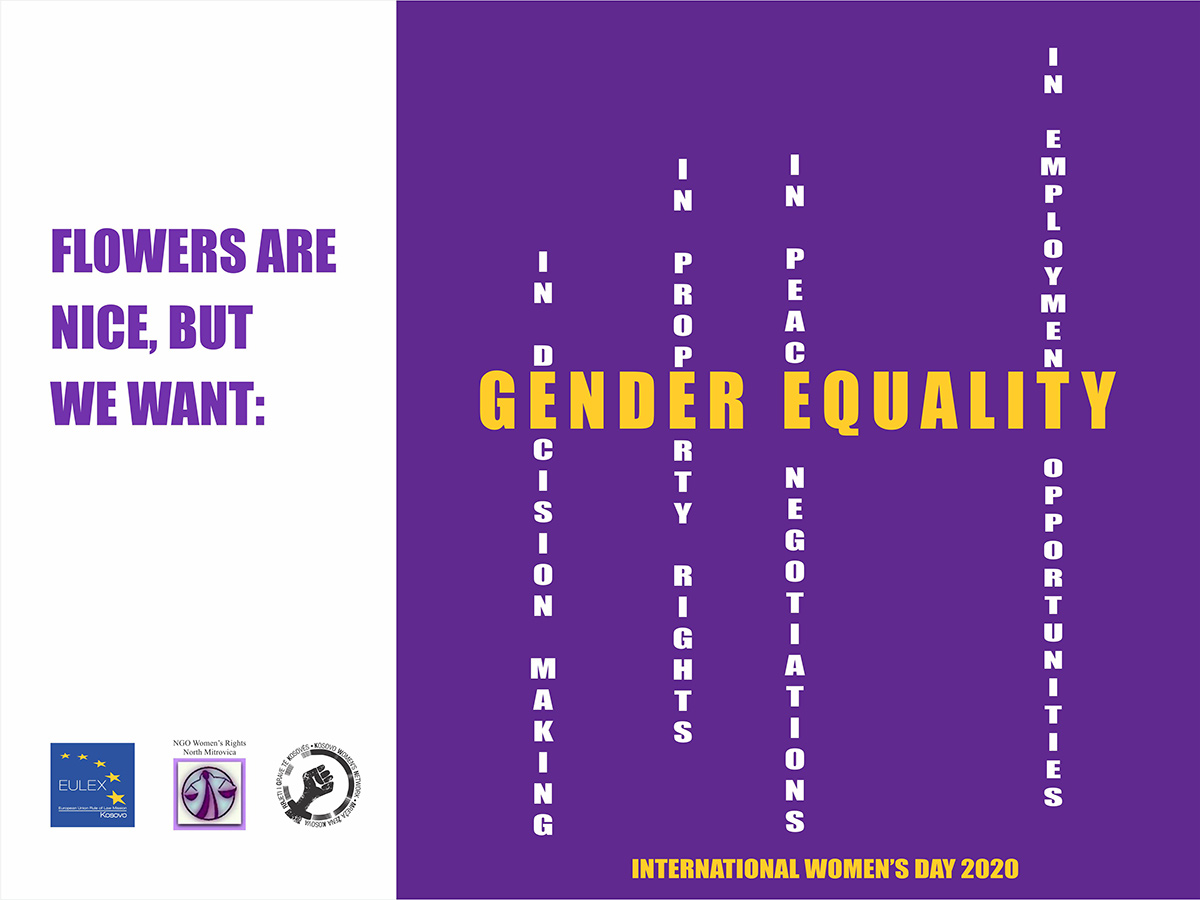 âFlowers are nice, but we want gender equality in decision-making, in property rights, in peace negotiations, and in employment opportunities.â This is the motto of the gender equality campaign launched by EULEX, in partnership with Kosovo Womenâs Network (KWN) and NGO Womenâs Rights North Mitrovica, to mark International Womenâs Day. The campaign involves the placement of billboards throughout Kosovo and a video aiming at raising awareness of gender equality.

Talking about the campaign, the Deputy Head of EULEX, Cezary Luba said: âEqual opportunities mean equal future. 2020 saw Kosovo making progress in involving more women in the decision-making process, by electing the first woman Assembly Speaker and by having five women ministers. This increased political representation of women is encouraging and we would like to see it reflected on all levels of society.â

EULEX Deputy Head also highlighted the importance of women having equal access to property, as this ultimately leads to economic empowerment. âIt helps to break down the chain of dependency that survivors of domestic violence might have towards their perpetrators,â Luba said.

Tijana Simic LaValley, Programme Director at NGO Womenâs Rights, said: âResearch indicates that the inclusion of women in peace negotiations increases the chances of a successful outcome by 64%. They have a humanistic approach which emphasizes the needs of people affected by conflict. Women's hearts are at peace rather than at war. Therefore, it's imperative to include women in peace negotiations.â

This campaign is part of EULEXâs work on gender issues. Since June 2018 when EULEXâs executive mandate in the judiciary ended, the Mission monitors gender-based violence cases at the entire criminal justice chain â from investigation to prosecution, trial monitoring and sentence execution- and provides recommendations to Kosovo authorities to improve their handling.

Additionally, EULEX, in partnership with the Institute of Forensic Medicine, is leading the âSpeak Up on Timeâ campaign on the importance of preserving biological evidence in sexual violence cases in order to establish the existence of the offence and bring the perpetrators to justice. Until now, some 800 students from 17 primary and secondary schools have attended the lectures held by experts from the Institute of Forensic Medicine and the Kosovo Police.