EULEX Rule of Law Mission organised last Thursday, 3 July, a seminar on domestic violence, bringing together representatives of the civil society and local institutions to discuss cooperation and effective measures that could help alleviate the problem of the domestic violence in the north. 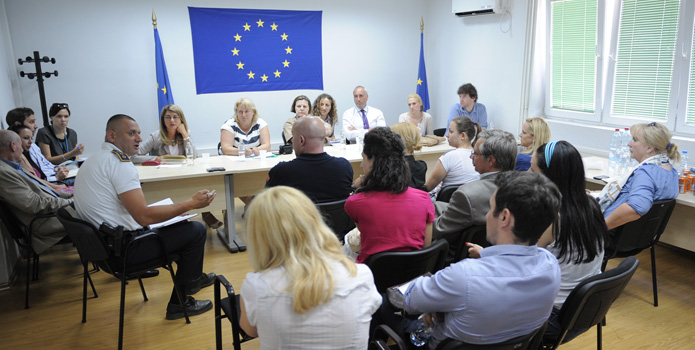 The event was opened by Joelle Vachter, Deputy Head of the EULEX Mission, who stressed that EULEX's aim is to facilitate better coordination amongst civil society and institutions in the north, in order to reach a common goal – effective support network for the victims of domestic violence and better coordination amongst the institutions and civil society for their benefit.

At the beginning of the meeting, Caleb Waugh from NGO Aktiv presented a project for building the safe house in the north. He stressed in his presentation that the safe house by no means should be just a hotel for the victims of domestic violence. Safe house is embedded in local institutional framework and requires coherent approach from legal, social and medical care to economic independence programmes for the victims.

According Olivera Milosevic, a local NGO activist, who presented the findings of the research of the position of women in Kosovo, Serbia, Albania and Macedonia, the main problem surrounding the victims of abuse is silence, as well as deep rooted tradition in the Balkans, where violence is almost culturally tolerated. The abuse they suffer happens far from the public eye and it is more than often unreported, leading to discrepancies between the legislation and practice. She added that the fact that the media rarely report on cases of domestic violence also contributes to an atmosphere of impunity. She called for the need to organise media campaigns against violence in order to raise public awareness and increase pressure.

Nenad Djuric stressed the importance of KP's security risk assessment before building of the safe house. He also stressed that the local tradition and customs cannot be regulated by law and pointed out that the idea to organise a media campaign against the violence could be very beneficial for the local community.

Alan Edwards, Chief of Organised Crime and Investigation Unit, said the victims of domestic violence are also silent in UK and other European countries. He gave presentation of domestic violence case in the UK and revealed that according to statistics, a woman is attacked 36 times in the UK before she reports the violence to the police. Bearing that in mind, he highlighted the need to communicate and cooperate between various institutional levels be it police, social services and local authorities in order to get a full picture of the victim and the family. He pointed out the strategy of taking the victim out of the abusive relationship is a good step forward.

According to the participants, the immediate concern is to improve communication between the victims of domestic violence, police, institutions and the community. One of the recommendations of the meeting is to organise public campaign against the violence as well as the conference on the issue, with the participation of local civil society and Kosovo government. EULEX stands ready to help.