Working to improve Justice in MitrovicÃ«/a 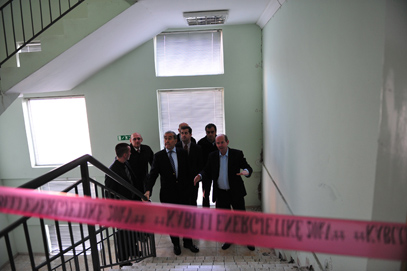 The EULEX Head of Mission Yves de Kermabon has paid a visit to the newly-elected Mayor of MitrovicÃ«/a, Avni Kastrati. The mayor underlined his readiness to work towards bringing together all the communities of MitrovicÃ«/a

The mayor also mentioned plans of the municipality to allocate office space in the old Cultural Centre for the Kosovo Police whose offices suffered damage during the earthquake last week. Their current building cannot be used for the foreseeable future.

Yves de Kermabon and Avni Kastrati also briefly met local journalists. The Head of Mission gave assurances that EULEX will continue to work for the benefit of all people in MitrovicÃ«/a. Asked when the local judges and prosecutors will be able to work again in the MitrovicÃ«/a Court, he responded âThe quicker, the better!â.

One reason for his visit to MitrovicÃ«/a was to see the court building and get an assessment form the experts of the scale of the damage caused by the earthquake. Mr de Kermabon also visited the court to see the damage for himself.