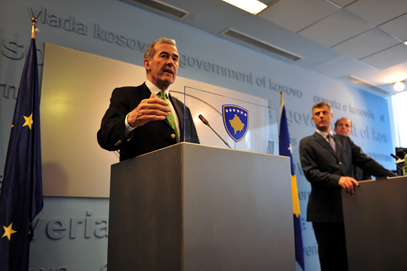 In the presence of the Prime Minister Hashim Thaci, Head of Mission, Yves de Kermabon and Minister of Economy and Finance, Ahmet Shala, signed Tuesday a MoU which marks the beginning of a process of transferring the executive functions of the Financial Intelligence Center from EULEX over to the Kosovo institutions.

The Financial Intelligence Center (FIC) is an independent unit in charge to collect and analyse data and information for the prevention of money laundering (and related offences) and of terrorist financing. The FIC keeps databases of all the CTRs (Cash Transaction Reports) and SARs (Suspicious Activity Reports) and all the data and information gathered whilst performing the analysis of such reports. Furthermore the FIC disseminates to the law enforcement agencies of Kosovo (Police, Tax Administration, Customs, CBK, etc.), to the international bodies and entities in Kosovo (EULEX, KFOR, IJPC, etc.) and to other FIUs abroad intelligence data and information related to the matters under its competence.

The FIC is therefore not conducting their own investigations, but they rather provide other investigative bodies with intelligence/information to be used to initiate or proceed with investigations.

The legal basis for the FIC is UNMIK regulation 2004/2. This regulation is to be replaced by a new law once the Assembly of Kosovo approves it.