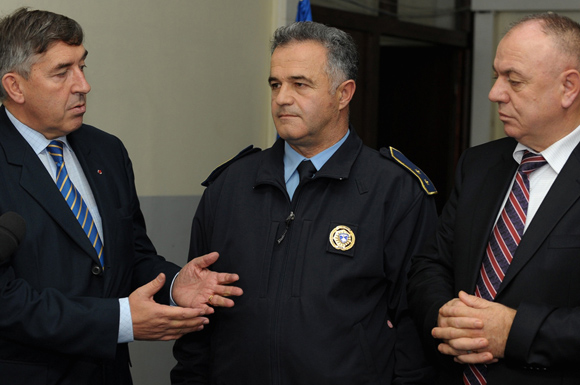 âEULEX will mentor, monitor and advise the Kosovo Police on this very important day,â EULEX Head, Bout de Marnhac, said on 9 December during a visit to the Kosovo Police Regional Police Headquarters in Mitrovica to discuss KPâs election preparations.

In this regard, Mr. De Marnhac had exchanges with both the Regional Commander, Sami Shabanaj, and Kosovo Police General Director, Reshat Maliqi. For their part, the commanders of both North and South Mitrovica police stations briefed the EULEX Head on their respective police stationsâ preparations for the 12 December balloting.

De Marnhac emphasized that his visit had two aims: to personally meet them beforehand to learn about the progress made, and to underscore EULEXâs support to Kosovo Police on election day.

âEULEX has full confidence in the KP which will have a leading role in providing security on the election day,â De Marnhac said after the meeting. âEULEX does not foresee any problems, but we are of course fully prepared for any eventualities,â he added.

KP General Director Reshat Maliqi thanked both EULEX and his police officers from the Mitrovica region on their close cooperation. âWe are working together. I think that we can achieve our goals as police officers â to help the citizens and to provide security during election day in Mitrovica,â said Maliqi.

Asked about the murder and attempted murder in the Leposavic area on 7 December, De Marnhac again strongly condemned the attack. He urged calm and responsible behaviour from all sides. âThe use of violence is completely unacceptable,â Xavier de Marnhac said, âit will lead nowhere!â