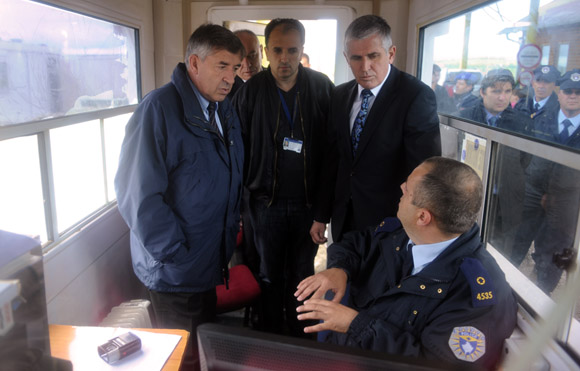 The Head of EULEX, Xavier de Marnhac, and the Minister of Internal Affairs Bajram Rexhepi visited Gate 3 at Merdar/Merdare today, where they met border police officers of the Kosovo Police and EULEX.

During this working visit, de Marnhac and Rexhepi were informed about the work that the border police are doing at this gate.

The General Director of Kosovo Police, Reshat Maliqi, and Udo Moeller, the Head of the EULEX Police Component were also present.

De Marnhac told the media who were present at the event that EULEX was in Kosovo to support the local institutions and would continue to do so.

The Minister of Internal Affairs and the Head of EULEX expressed their satisfaction with the work of the police at this gate, and the cooperation of the police officers in the field.

âIt is a joint working visit with the Head of EULEX, and the aim is to perform better and to have better cooperationâ, Rexhepi told the media, adding that âthere is a joint commitment to achieve greater successes and to have a more positive Progress Report in the futureâ

After Gate 3, de Marnhac and Rexhepi visited the police station in PodujevÃ«/Podujevo and the Regional Directorate of the border police in Lluzhan/LuÅ¾ane.