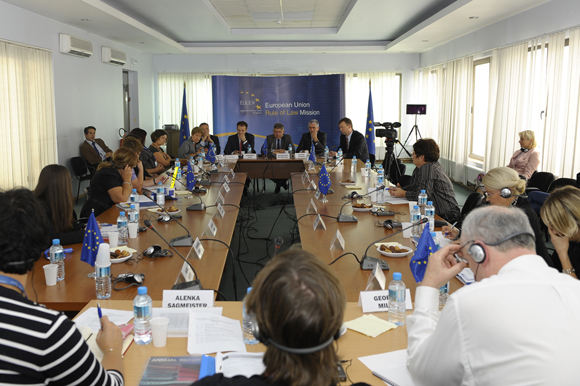 âWomen are particularly vulnerable to corruption because they are often more reliant on public services such as health, have less income than men and face sexual discrimination in education and jobs,â Xavier Bout de Marnhac, Head of EULEX, told a roundtable, entitled The Impact of Corruption on the Lives of Women, held at EULEX on 26 September.

At the event, organized by the EULEX Human Rights and Gender Office, introductory comments were also made by Hajredin Kuqi, Deputy Prime Minister and Minister of Justice, and Bajram Rexhepi, Minister of the Interior.

The participants counted womenâs NGOs, UN Women and government officials, including from the Anti-Corruption Agency.


At the outset the Head of Mission summarized that corruption was âthe abuse of a position of authority for private gain.â Participants provided examples: boards of Kosovo companies, with overwhelming male members, could force a single female member, fearing loss of her job, to comply with malpractices. Poor women were the main victims when doctors relocated expensive medical equipment from public hospitals to their private practices. Despite such asymmetries, all agreed that corruption is a two-sided activity between the one who gives and the one who receives bribes.

De Marnhac said such corruption was more prevalent in post-conflict societies which lacked transparent and accountable institutions and faced the challenge of creating equal opportunity, codes of conduct and passing laws to stem abuse of power.

He identified three reasons for corruption in Kosovo: a. Asymmetric gender relations with men in power positions; b. Vast differences between rich and poor; and c. The lack of efficient state institutions in a post-conflict society. Without doubt, women can contribute in the fight against corruption.

The participants said they regarded the roundtable as a good start to further study the nexus between women, gender and corruption, and requested a follow up.

De Marnhac had pledged to organize this roundtable when marking the 10th anniversary of the UNSC Resolution 1325 on Women, Peace and Security last year.