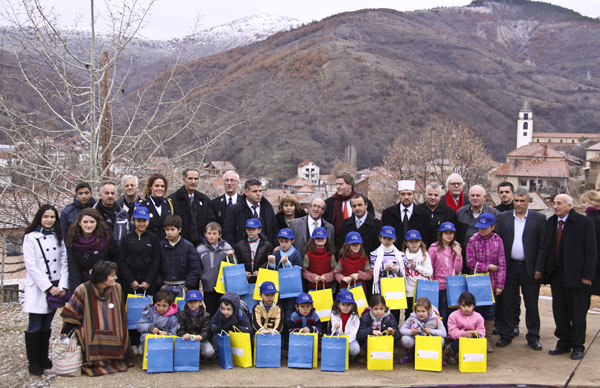 The Netherlands Embassy together with EULEX organised a Surprise Day for children in Janjevo/JanjevÃ«, in which educational materials and surprise packages were handed over to the local school.

The event was initiated by Anne van Grootveld a police officer working in EULEX, who collected small gifts and presents from her colleagues.

During a short ceremony EULEX Deputy Head of Mission Andy Sparkes and Ambassador of the Netherlands Robert Gosch symbolically handed over school materials to director of the primary school Bajram Gashi, priest Don Mate Pali and imam Shemsi Gajtani. In a speech to children, parents and teachers Mr. Sparkes emphasized the importance of education and EULEX actions in the area of education. Throughout 2012 EULEX officials have visited schools every week to talk with pupils about the rule of law. In Albanian language Mr Sparkes also talked directly with the children who he called âthe future of Kosovoâ.

In his speech Ambassador Robert Bosch spoke with the children about the importance of police and explained them in simple words what police can do for them. EULEX Police officers then gave to the kids some little gift packages.

The Netherlands Embassy is a long-term supporter of an educational project in Janjevo/JanjevÃ«, run by the NGO The Ideas Partnership.