From the European Parliament to the EU Rule of Law Mission 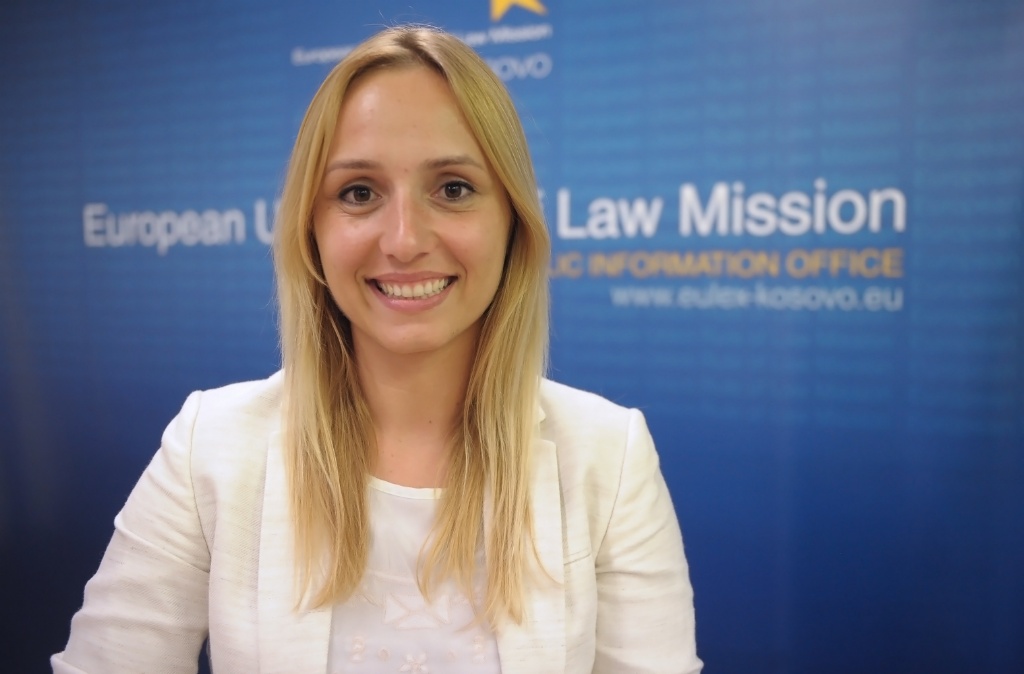 Alina Matache has been involved in the work of the European Union since her early student days, which is one of the many reasons why she pursues the EU values with a smile, dedication and enthusiasm.

Building on her experience, Alina went further afield by joining the Strengthening Division of the EU Rule of Law Mission in Kosovo last August.

Her position as a Special Assistant to Head and the Deputy Head of the Strengthening Division involves carrying out various tasks, but essentially it is all about Getting Things Done.  Now.

Division management and Alina coordinate the process of governing the Mission Implementation Plan (MIP) Actions for the Strengthening Division. MIP Actions, follow the project management methodology spelling out the activities, expected results and objectively verifiable indicators on each MIP. Alina’s main task is to monitor and assess the outputs of every Unit’s project, analysing and providing feedback for the Division management on achieved objectives in light of a broader Mission mandate.

According to Alina, the Mission work requires competencies in dealing with various stakeholders, including developing and maintaining a partnership approach.

“I always try to keep a smile, to listen and negotiate and when needed be persuasive, especially when I have to build bridges among different departments. For instance, in the Strengthening Division each unit has its own priorities resulting from different areas they cover, such as: police, borders, justice, correctional and internal matters. Hence, it is essential to align all these contributions to reach the Strengthening Division goals”, says Alina.

She studied Political Science in Italy, completed her Erasmus in France and gained a Master Degree in European Studies in Brussels. “Because I was born and raised in Romania, had my education in Italy and started my European career in Brussels, I simply feel European”, she stresses.

During her studies in Italy she engaged with various NGOs, trade unions and political parties in order to defend the rights of foreign students and the migrant workers. Eager and ambitious even whilst studying, she also took various jobs in order to support herself.

“Every CSDP Mission has to inform the European Parliament, in the Sub-Committee on Security and Defence (SEDE), about their activity. And so it happened that I started learning about Kosovo, by contributing to draft amendments on the Annual Reports”, explains Alina.

She then decided to attend several courses at the European Security and Defence College (ESDC). “I am very grateful to ESDC team and for their professional training to the CSDP Missions. I am even happier that I can give my contribution now when I can apply it here in Kosovo the knowledge I acquired”.

Alina came to Kosovo for the first time after she joined EULEX. Nevertheless, having been familiar with the Balkan tradition and lifestyle, it was very easy for her to adapt to Kosovo’s daily life.

In fact while living in Italy, she befriended a family from Kosovo, familiarizing herself with a local culture before her arrival. “My family immigrated in Italy in 1995 and back then in our neighbourhood we were the only Romanian family besides a Kosovar family”, she remembers.

Alina has made a lot of new friends since she arrived. She travels a lot every weekend and uses her time off to visit different places in Kosovo and in the region.

In addition, Alina is also active in sports and just started her new CrossFit adventure which she enjoys very much, as she is always eager to try new challenges.