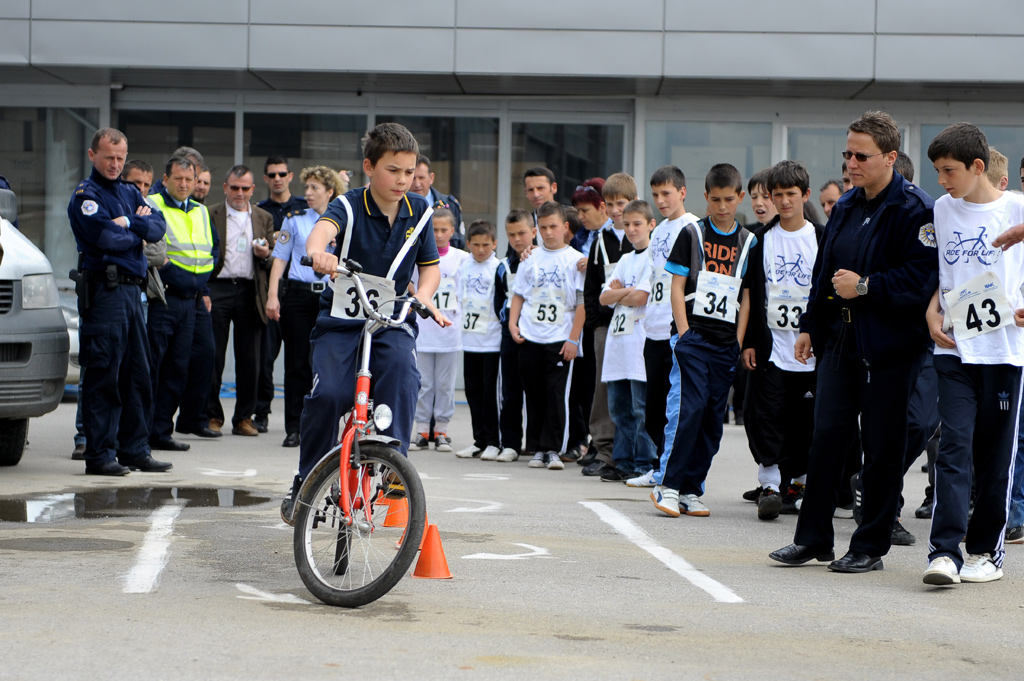 When asked to think of an image that you associate with the word 'police', you would be forgiven for thinking of a patrol car responding to an emergency with its sirens blaring, or a team of policemen handcuffing a violent criminal. That's because what we're thinking of is traditional policing. But as the years have gone by, methods of modern police forces have evolved. These new methods have allowed police forces to become far more effective at fighting crime and maintaining public order. The introduction of 'community policing' has played a big part in this.

Before the EULEX Mission arrived in Kosovo in 2008, community policing was a concept that had not yet become an established way of policing. "EULEX brought us the quality we needed to help us develop to the next level of policing," says Lieutenant Selman Tanushi, Gjakova's deputy station commander, "they brought us to a higher level in many working fields".

And the statistics suggest that community policing could be making a real difference. Kosovo Police's Community Policing Strategy and Action Plan 2012-2016 indicates that the overall number of registered cases with the Kosovo Police has shown a marked downward trend since 2008. But what is community policing and why is it so effective in helping lower the levels of crime?

If we think back to the image of traditional policing above, community policing could be thought of as the low-key, subtle work the police do within the community to prevent that patrol car from needing to respond to the emergency in the first place, or to prevent that violent criminal from needing to be arrested. "Crime fighting and public order issues are important, but all major aggravations start small," explains Paul Akkermans, a Belgian police officer who served with EULEX until 2014.

Community policing is all about officers getting out into the community and developing partnerships, identifying problems and solving them, "being among the citizens recognising small annoyances at an early stage and working proactively to stop things from getting worse is the core of our work," he continues.

Martin Boom, a Dutch police officer, says that this can mean anything from "chasing up with the municipality to make sure a broken street light is fixed, to working closely with the principal of the local high school to protect the next generation from exposure to crime". Mr Boom has been working with Kosovo police for over two years, sharing ideas and experiences with police stations around the different municipalities in Kosovo.

Interethnic incidents can spiral out of control very quickly. Fadil Gashi, a policeman from Peja, says that community policing can be an effective tool to prevent this, particularly in an area like Peja, which is sensitive to interethnic incidents: "Community policing has been a very necessary way of maintaining peace in the community, especially as we are in a post-war period".

"Our European colleagues gave us ideas and experiences that helped us build community policing to the next level. For example, we worked together on launching an anti-drugs campaign where we reached out to students in innovative ways to tell them about the dangers of using drugs," says Lieutenant Gashi.

"We also worked together on starting another type of project with the schools. The idea was to find a way to stay connected with the youth; this is very important in community policing", he emphasised.

These projects were devised between EULEX and the KP to help tackle the growing problem of violence and drugs in schools in the Peja region. Without the right support, violent children can become potentially violent criminals when they leave school. And those involved in drugs often find themselves sucked into a world of crime – preventing that from happening helps to reduce potential levels of crime in the region.

Thinking of creative ideas to solve problems and prevent them from spiralling out of control is an essential skill that makes community policing work. This way of thinking cannot be learned overnight, "it takes a few days to learn a new policing skill or learn how to use a new tool, but to learn an entirely new way of thinking takes a lot of patience and persistence," says Mr Boom.

"This is an important strategic tool to raise the awareness of the KP basic operators on this topic" he continues.

Community policing is part of a subtle, long-term approach to bringing Kosovo Police to the standards commonly referred to as 'best European practices'.

"In my time in Kosovo I can't point to the statistics of how many investigations my unit has done or how many trials I have proceeded over. My job is different to that. But I get enormous satisfaction of having helped to change the way of thinking in a police force that will be of benefit to the citizens for a long time to come," concludes Mr Boom.