Rule of Law and Judicial Process Seminar at IBCM... 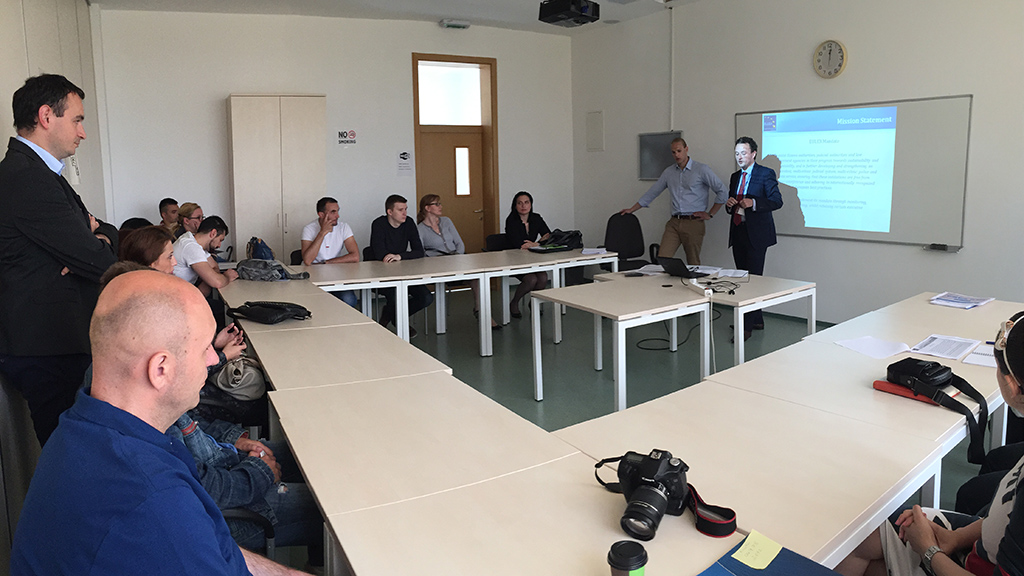 EULEX implemented a seminar on the rule of law and the judicial process for a dozen and a half students at the International Business College (IBCM) in northern Mitrovica. Judge Malcolm Simmons, President of EULEX judges, lead the lecturing portion of the seminar, while Ian Bancroft, Coordinator north, and Dane Koruga, PPIO Communications Officer north, provided an overview of the Mission’s mandate and facilitated the discussion amongst the students.

As IBCM has two campuses in Mitrovica, one in the north and one in the south, Serbs from Kosovo and elsewhere attend lectures in the north while Kosovo Albanians undertake their academic activities in the south campus. However, as this talk garnered focused attention from a wide array of students, the participating group drew from both the southern and northern student bodies. Charlene Miller, Deputy Director at IBCM, was key in conducting outreach for the seminar and organising the participation of interested students.

Malcolm Simmons, utilizing his extensive experience as an EULEX judge, explained the judicial process in detail. He elaborated on the distinguished roles of prosecutors and their duties, as well as those of the judges who hear and preside over cases. He explained how in his role as President of EULEX Judges he performs supervisory duties over the EULEX Judges team who work in the Basic Court of Mitrovica. He explained that EULEX judges and prosecutors are independent in their decision-making and free of political influence. Trials led by EULEX judges deal mostly with crimes such as war crimes, serious and organised crime and corruption. Their cases often garner significant public attention.

The students, while mostly focusing on business administration and management, were very interested to learn about the process that also has an impact on their careers and the environment in which they live in. Among the most dominant questions asked by the students was the public perception that EULEX garners and what activities it undertakes to elaborate on its body of work. This was a rather straight answer as the seminar being conducted was just the sort of outreach that EULEX facilitates to increase transparency and provide greater insight into the judicial process. In addition to conducting seminars with students, from both public and private universities, EULEX engages with civil society and the wider public to inform them of the judicial process, access to justice, and the Mission’s mandate of restoring the rule law throughout the north of Kosovo.