Head of EU Rule of Law Mission in Kosovo,...

Head of EU Rule of Law Mission in Kosovo, Lars-Gunnar Wigemark, in an exclusive interview for Klan Kosova TV 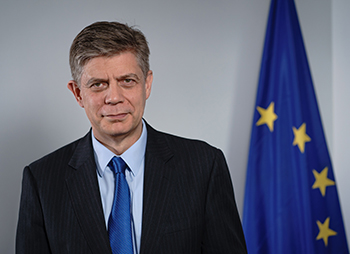 In an exclusive interview for Klan Kosova, the Head of the EU Rule of Law Mission in Kosovo (EULEX), Lars-Gunnar Wigemark, talked about the truth behind many media reports on EULEXâs role and support for the Kosovo Specialist Chambers and Specialist Prosecutorâs Office, the recent media reports regarding an alleged search operation at the office of Kosovoâs Acting President, EULEXâs role in the recent discovery of human remains in Kizevak, and the Missionâs monitoring of selected cases in Kosovoâs justice system.

Asked about the operations of the Specialist Prosecutorâs Office (SPO), which resulted in the arrest of former KLA members, Wigemark explained that there is a misunderstanding that EULEX is making the arrests and noted: âWhat you see on TV and in photos is mostly EULEX vehicles and members of our Formed Police Unit. But they are there only to support the SPO.â The EULEX Head stressed that the SPO carried out the recent operations and arrests in Kosovo on the basis of a court order: âTheir representatives come here in Kosovo. We are obliged by the Kosovo law to support them, to provide logistic and operational support, together with the Kosovo Police.â

Asked to comment on whether EULEX provided support for an alleged raid at the Presidentâs Office, Wigemark categorically denied this: âThe morning after the resignation of President Thaci, we were contacted by madam Osmani and we were asked whether it is correct that EULEX is about to conduct a search at the Presidentâs Office. We replied that there is no such plan. There are two untruths here. First of all, EULEX does not conduct any searches and secondly -and more importantly- there was never such a plan.â

Speaking about EULEXâs robust systemic and thematic monitoring of selected cases at the entire chain of the criminal justice system, Wigemark said: âThese days, we are often asked by prosecutors and judges to monitor their cases. Why is that? Because unfortunately there is still interference in the judiciary.â

Regarding the excavations in Kizevak and the role of EULEX in the identification of the exact location where the human remains were found, the Head of Mission mentioned that EULEXâs forensic experts analyzed aerial images from 1999 and managed to pinpoint the exact location of the site. Wigemark noted that the Missionâs forensic experts are embedded in Kosovoâs Institute of Forensic Medicine.

Watch the first part of the interview (min 2:38)

Watch the second part of the interview