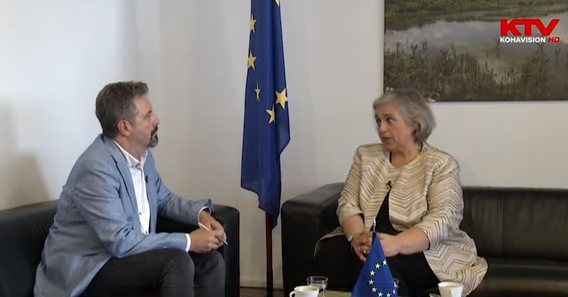 Outgoing EULEX Head, Alexandra Papadopoulou, gave a valedictory interview to Koha Ditore editor-in-Chief, Agron Bajrami, and spoke about the role and work of EULEX, as well as the rule of law in Kosovo.

In this wide-ranging interview, which was aired on KTV on 12 July and was published in Koha Ditore on 13 July, Papadopoulou stressed that Kosovo has very good laws, which however must be implemented consistently, and it needs strong rule of law institutions. âThis is a fact. It is good for Kosovo, it is good for the Kosovo people. Kosovo has a future, and this future cannot be bright without the rule of law,â said Papadopoulou.

Asked about EULEXâs work and legacy in the past 10 years, the outgoing EULEX Head noted that she takes pride in EULEXâs work, adding however that there are things that could have been done differently and better. Management of expectations, she explained, is one area where the Mission could have done better by making clear that improving and strengthening the rule of law takes time and hard work and cannot happen within just a few years. âWe have to see the balance. And the final balance is not written now, it will be written when EULEX leaves. And the balance is positive,â said Papadopoulou. The outgoing EULEX Head also stressed that everybody judges EULEX in relation to its past executive mandate in the judiciary but noted that the Mission was and is much more than that: âWe helped build customs, the police, the correctional services and the judiciary, not only when dealing with cases, but also by building their capacities.â In addition, Papadopoulou said that the implementation of the justice integration agreement in the north facilitated by the EU was a big success story which was made possible thanks to EULEX.

Asked whether there is road for EULEX in the future, Papadopoulou replied affirmatively, adding that Kosovoâs justice system needs an âauditorâ, namely an institution which will point out what is right and what is wrong in the justice system. âHowever, an auditor never criticizes publicly,â said Papadopoulou, and added: âOur mission is to help Kosovo and help Kosovo institutions. When you help them, they are in the front seat. You are behind, just to help them, support them, and correct them if they are wrong. But you donât have to publicize that.â

Papadopoulou also spoke about EULEXâs robust monitoring mandate of selected cases, stressing that EULEX justice and police monitors have identified a number of concerning issues that need to be addressed. âA big problem we have identified is that most of the big cases go to the same judges,â said Papadopoulou, adding that this is something that can be addressed. âEULEXâ, she said, âshares reports to the Ministry of Justice and the Kosovo Judicial and Prosecutorial Councilsâ, where these issues are identified and practical recommendations to fix them are provided. âAnother problem EULEX case monitors have identified is that a high percentage of the EULEX-monitored cases resulted in unproductive hearings. However, this percentage decreased considerably in the past monthsâ, said Papadopoulou.

Asked about war crimes, the outgoing EULEX Head said that justice has to be rendered and people who committed war crimes have to be punished. Papadopoulou also replied to criticism in Kosovo about EULEX not prosecuting war crimes allegedly committed by Serbs: âThis is wrong. EULEX is blind when it comes to nationality of perpetrators of war crimes. Completely blind. But your law, until very recently, did not allow indictment in absentia. So we have a lot of files, ready files, about war crimes committed by Serbs, which were transferred now with the new mandate to the local authorities.â

Papadopoulou also expressed concern about the youth that leaves Kosovo: âIn 2000, young people, young Kosovars from the US, from Europe, with wonderful education and wonderful jobs, left their jobs and came to Kosovo to offer their services. Now I see the opposite. I see young Kosovars with wonderful education leaving Kosovo because they are frustrated. This worries me a lot because if the best and the brightest leave, who will continue building the place? Nobody. This is something very negative and I think every politician in Kosovo should put that as a top priority.â

At the end of the interview, the outgoing EULEX Head thanked everybody in Kosovo for their support and kindness. âEverybody has been so kind to me that it was overwhelming,â concluded Papadopoulou.

You can watch the full interview here: