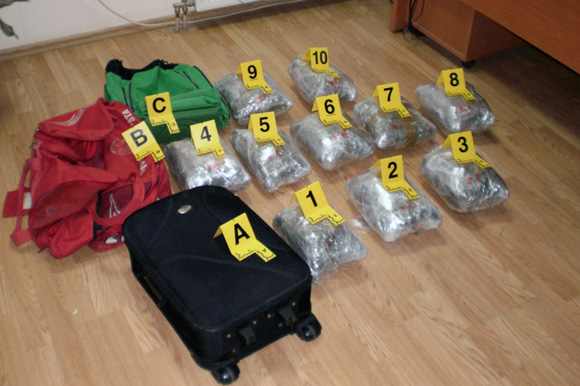 In a joint operation between EULEX and local authorities, a significant haul of drugs has been seized at the Vermice/Vrbnica border crossing between Kosovo and Albania. On the morning of 10 March, on the initiative of Kosovo Customs, four vehicles coming from Albania were stopped. Â A EULEX Customs Mobile Unit and officers from the Special Police Department (SPD) Canine Unit (K9) were involved in searching the vehicles along with Kosovo Police and Customs.

One of the vehicles was a regular service coach from Albania to Kosovo.

Stepan Krejci from the EULEX SPD K9 unit and his dog started to search the luggage for drugs and weapons.

âThe dog showed an interest in three bags which had been left in the bus that was stoppedâ, said Stepan. âI thought this was very suspicious and informed Kosovo Customs and Police officers.â Kosovo Customs and Police officers opened all three bags and found ten packages wrapped with transparent cling wrap plastic. The packages contained material believed to be marijuana. The forensic unit and the Kosovo Police anti-drugs unit were informed. Later that day the packages were removed from the baggage and weighed. The total weight of the drug was total 10.5 kg. The case is now being handled by the KP anti-drugs unit.