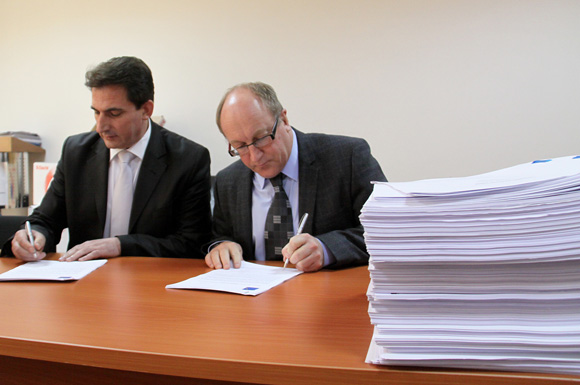 The Acting Head of EULEX, Andy Sparkes, today handed over to Blerim Camaj, the Head of the Civil Registry Agency, 52 books of all birth records for the matriculation territory of JanjevÃ«/Janjevo from Lipjan/Lipljan municipality, which were certified by EULEX.


Sparkes said that it is a small step, but a very significant one as it is the start of something much bigger.

âThe total number of books that need to be certified in this process will be many thousands. So, it is a big project. We now have all the arrangements in place for this. Soon, in Nis in Serbia, we will begin the process of carefully copying all of these records under the supervision of EULEXâ, said Andy Sparkes.

EULEX certifies copies of the registry books as part of the EU facilitated Dialogue agreement reached on 2 July 2011 between Pristina and Belgrade. The original civil registry books are currently in Serbia.