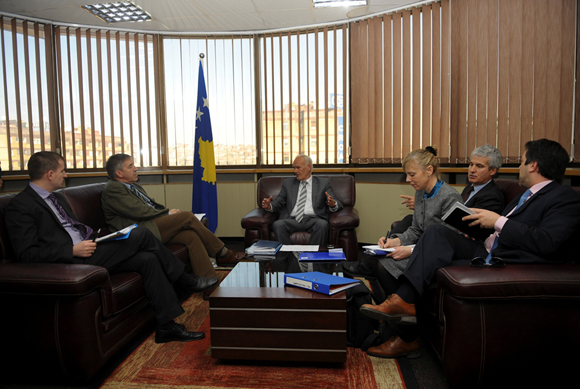 The Head of EULEX, Xavier de Marnhac has confirmed the continuing need for close cooperation between EULEX and the State Prosecutorâs office at a meeting in Pristina. Mr de Marnhac held talks with the Kosovo State Prosecutor, Ismet Kabashi. Among the issues discussed was the impact of the ongoing strategic review of the EU Rule of Law mission.

âDuring the next two years, we need to work closely together especially in preparing the ground for the transfer of additional responsibilities from EULEX to local prosecutors. We also need to work closely on how cases are allocated and at an early stage in revising the current legislation,â said Mr de Marnhac.

Mr de Marnhac and Mr Kabashi shared the opinion that cooperation between EULEX and Kosovoâs State Prosecutorâs Office in developing and strengthening the rule of law institutions in Kosovo, will contribute not only to an independent justice system, but will also be key in paving the way for visa liberalization and the feasibility process for the Association and Stabilization Agreement. As recommended by EU Member States, this should be benchmarked-driven more than time-driven. They both agreed to firstly define and share these benchmarks.